It would perhaps be a step too far to say Bristol City are rooted in danger but they're certainly not looking great right now. Can they pull further away from those below them with a win here? Find out with our Bristol City vs Millwall match preview with free tips, predictions and odds mentioned along the way.

The Lions to kick off new year with a roar

Bristol City might well have home advantage here but we don't see that helping them much; they've lost their last two at Ashton Gate and, in more general form, have won just one of their last five games taking a total of four points from the last 15. Millwall meanwhile won their last away game as they impressively beat Coventry; they've also won two of their last three in general terms. The Lions have a good head to head record against Bristol City too; they've won the last two meetings but, perhaps more impressively, have only lost twice in the last 10 meetings and haven't suffered defeat at Ashton Gate since 2012.

Our next prediction backs both sides to score and here is why. Bristol City have seen each of their last three matches end with goals for both teams whilst  four of Millwall's last five have seen goals at both ends. The head to head form of five of 10 games featuring a clean sheet makes this somewhat of a toss up tip; what really drives us into a ‘yes' prediction is the fact that these betting odds offer the greatest value.

All the stats & odds for Bristol City vs Millwall

Bristol City vs Millwall: Check out the team lineups

Bristol City aren't having a great season but they'd need a real collapse to get sucked into pressure. This is a big time in the calendar though and the Robins will want to take something from this match having lost their last two. Millwall meanwhile look like we've come to expect Millwall to look. They're good enough to get by but not spectacular enough to truly trouble those in the upper regions of the league. A couple of wins could see them come into playoff contention though so it's all to play for.

Bristol City might be sitting eight points above the bottom three right now but having played more games than most of those below them, a loss here would be a big blow. A win meanwhile could move them right into midtable territory; they put in a decent enough display – despite losing – so we don't envisage mass changes.

Unlike their hosts, Millwall are not in one sniff of trouble. The down side of their season being that it would take an almighty effort for them to seriously challenge those above them too. Still, this is a game where they'll fancy another three points and if that keeps them motoring then you never know. They beat Coventry last time out and changes should be few and far between.

The final word on Bristol City vs Millwall 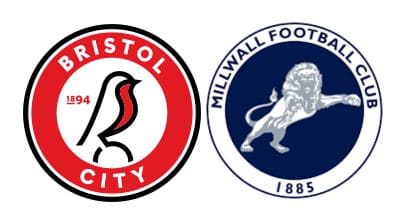