Brighton could still finish above Wolves and in 8th place if they finish the season strongly but face a tough task at home to Man Utd in the Premier League this weekend. Manchester United look set to miss out on Champions League qualification with both Arsenal and Tottenham performing better and having two games in hand and could still face a battle from West Ham for 6th-spot in the table.

There is a great chance that we will be treated to goals at both ends of the pitch this weekend as that has been the result in four of the last six league meetings between the two clubs. Both teams scored in Brighton's last home game, a 2-2 draw with Southampton, while three of Man Utd's last five outings have produced goals at both ends of the pitch.

At least three goals have been scored in six of the last seven encounters between Brighton and Man Utd in all competitions, and we're expecting more of the same on Saturday evening. Four of the host's and four of the visitor's last five outings in the Premier League have witnessed over 2.5 goals scored, adding plenty of weight to our prediction for this weekend's clash at the AmEx.

Everything you need to know about Brighton vs Man Utd

Man Utd to miss out on Champions League football

Brighton were at their very best last time out against Wolves at Molineux. A penalty from mac Allister put the Seagulls 1-0 up just before the break and in the 70th-minute, Trossard made it 2-0. Bissouma added a third goal 4-minutes from time to ensure that all 3pts went back home with the Seagulls.

Man Utd made a return to winning ways on Monday night when they played host to an in-form Brentford side. a goal inside the opening 10-minutes from Fernandes put the Red Devils in front, after good work from Elanga who claimed an assist. Ronaldo converted a 61st-minute penalty to double the home side's advantage and in the 72nd-minute, Varane got on the scoresheet to make the final scoreline 3-0.

Brighton: Sarmiento, Moder and Mwepu could miss out this weekend due to injury.

Man Utd: Sancho, Maguire, Wan-Bissaka, Shaw and Pogba are the injury concerns for the visitors. 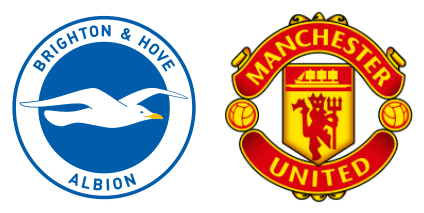