These two sides sit level on points in the Premier League with 16 games played and we're expecting a close and competitive 90-minutes between the pair despite both clubs potentially being without a number of key first-team players.

Five of the last seven meetings between Brighton and Bretford in all competitions have produced under 2.5 goals, and we're expecting another tight and tense 90-minutes on Boxing Day. Each of Brighton's last six league games have witnessed fewer than three goals scored, while two of Brentford's last four outings have also produced under 2.5 goals.

These two teams have played to a very similar level so far this season and with neither side in top form right now, we're backing this game to end all square. Brighton have drawn four of their last six league games, all of which produced under 2.5 goals, while Brentford have drawn two of their last three away games and have faired reasonably well on the road this season.

All you need to know about Brighton vs Brentford

Brighton might have had the home advantage in their last game against Wolves but it didn't do them any favours. A solitary first-half stoppage-time goal from Saiss proved enough for the visitors to claim all 3pts in this dull affair. That result meant that Brighton slipped down to 13th in the Premier League table after not long ago looking like they might even challenge for the European places.

Brentford secured all 3pts in their last league game at home to Watford despite going a goal down in the 24th-minute. The Bees managed to muster a late response to being behind, first equalising through Jansson in the 84th-minute and then scoring a dramatic winner deep into stoppage time via a Mbeumo penalty. That result took Brentford onto the same points as this weekend's hosts Brighton as well as Crystal Palace, who have played one more game though.

Brentford: Ajer, Toney, Pinnock, Jorgensen, Raya, Jeanvier and Dasilva could miss the trip to the south coast due to injury or illness. 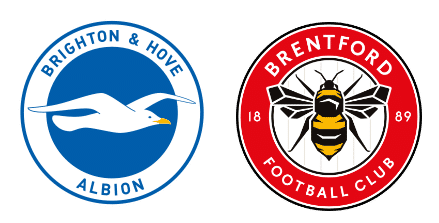