Brighton currently sit 9th in the Premier League table, 6pts and three positions above Saturday's guests, Aston Villa. Both teams will be desperate to return to winning ways on Saturday after both suffered back-to-back defeats in the Premier League. Brighton have the home advantage but they are also the draw specialists, so this game could well end in a stalemate.

We're predicting a draw on Saturday between two sides that are currently out of form. Brighton have been dubbed the draw specialists in the Premier League this season and the last two meetings between these two sides at the AmEx have both ended in stalemates. The hosts have only won one of their last six matches in all competitions and the same can be said for Aston Villa, with both teams drawing twice during that period.

It's difficult to see either of these teams keeping a clean sheet on Saturday as both have only managed to shut out their opponents in one of their last six attempts across all competitions. Both teams have also scored in five of the last seven encounters between these two clubs, while three of Brighton's last six fixtures have produced goals at both ends of the pitch.

Everything you need to know ahead of Brighton vs Aston Villa

Both teams have suffered back-to-back defeats

Last time out, Brighton had the home advantage against Burnley and were tipped by most to come away with all 3pts. However, it was Burnley that looked like the home side in this game, scoring twice before the break and netting another in the second forty-five to run out shock 3-0 winners. That result moved Brighton's goal difference to -3 and left the club 6pts behind their nearest rivals Tottenham.

Much like Brighton, Aston Villa were expected to win at home against Watford but it was the underdogs that secured all 3pts. A solitary second-half strike from Dennis proved enough for Roy Hodgson to get one over on his former player, Steven Gerrard, as Watford picked up a vital win in their battle against relegation. Villa are by no means out of trouble just yet and if their poor run of results continue, they could soon find themselves right in the thick of it at the wrong end of the table.

Brighton: Sarmiento, Webster and Mwepu look set to miss out this weekend through injury but Dunk returns to the squad following a suspension.

Aston Villa: Nakamba and Traore are the main injury concerns for the visitors but Villa do welcome back Konsa following suspension.

Brighton vs Aston Villa – Your Questions 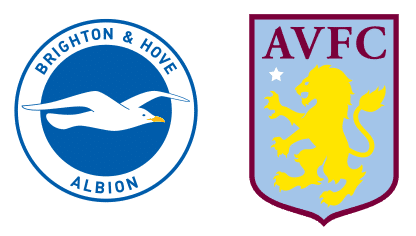