Brentford welcome high-flying Liverpool to the Brentford Community Stadium for the first top-flight meeting between the pair since 1947. Liverpool have started the new season like genuine contenders for the Premier League title, while Brentford will be even happier with their start as they sit in 9th spot and look like they could avoid a relegation battle.

Here are our predictions for Brentford vs Liverpool

Liverpool are in such good form that it is hard to see Brentford ending their winning run this weekend. Klopp's men have won their last four games in all competitions, keeping clean sheets in each of their four Premier League wins this season. Brentford lost their last home game against Brighton 1-0 and will be up against a much tougher opponent on Saturday night.

We're not expecting a goal-fest this weekend, despite the fact that Liverpool are finding the back of the net on a regular basis, as Brentford don't concede many goals at home and the hosts will be up for this game. Under 2.5 goals have been scored in four of Brentford's last six outings in all competitions and Liverpool have only conceded two goals in their last four fixtures.

Sadio Mane has started the new season brightly, netting 3 league goals in Liverpool's opening five matches, and we're backing the Senegal international to score against Brentford on Saturday. Mane scored in Liverpool's last league game against Crystal Palace and also netted in the Red's last away game against Leeds, so you can see why we're backing the 29-year-old to score this weekend.

Brentford thrashed Oldham 7-0 in the League Cup in midweek with Forss scoring 4-goals all by himself, so Bees are bound to be buzzing this weekend. Brentford secured an impressive 2-0 win at Wolves in their last league game and cannot be underestimated by Liverpool, even if the visitors are in fantastic form.  The Brentford fans and players are bound to be up for this game as they welcome one of the Premier League's big boys to the Brentford Community Stadium.

Liverpool followed up their 3-0 win over Crystal Palace in the Premier League with a 3-0 win at Norwich in the League Cup with a weakened starting eleven. The Reds appear to be in top form and look very confident right now but a trip to Brentford could prove trickier than expected as this is a ground that the Liverpool players don't know and the home side have nothing to lose as a defeat is expected.

Brentford: Baptiste is suspended this weekend and both Sorensen and Dasilva will miss the game through injury.

Liverpool: Elliott and Thiago are unavailable for the visitors, while there are fitness concerns over Keita, Williams, Alexander-Arnold and Firmino. 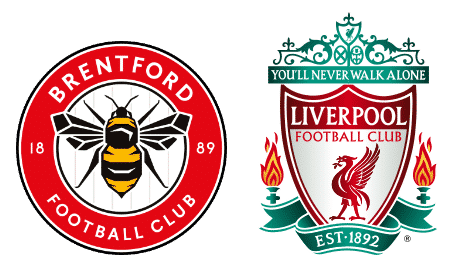