Brentford and Everton meet to battle it out for three Premier League points on Sunday. Read our expert predictions and find the latest odds for the game below in our match preview.

Everton have taken just one point from their last four away games ahead of their trip to play Brentford. Find our top three predictions for the contest below.

With four defeats in their last five assignments respectively, both Brentford and Everton are in rotten form, though the Toffees’ personnel crisis could allow the Bees to rediscover their sting on Sunday. Dominic Calvert-Lewin, Abdoulaye Doucoure, Yerry Mina, Tom Davies and Demarai Gray will all likely be out with injuries, while Richarlison and Mason Holgate are both suspended. With so many of their first-choice players absent, Everton will be vulnerable and we’re backing Brentford to take advantage.

Brentford have been both scoring and leaking plenty of goals of late and as a result, their matches have been hugely entertaining affairs. Their pulsating 3-3 draw at Newcastle last weekend was the fifth time in six games involving the Bees where over 2.5 goals rattled the net and we expect more action when Brentford host Everton on Sunday. It’s worth noting that the Toffees’ last three contests averaged 4.33 goals per 90 minutes and a similar level of net-shredding drama is anticipated this weekend.

With just three clean sheets between them in their last 14 Premier League fixtures combined, the Brentford and Everton defences have been far too easy to breach for opposition attackers. The Bees’ only shutout at home came in their campaign opener against Arsenal, while the Toffees have kept their hosts out just once in six attempts on the road since the summer. Neither team can be relied upon to stay solid, so back both to concede on Sunday.

Brentford vs Everton preview: Wins scarce for both teams

Brentford scarcely deserved the point they nabbed against Newcastle last week, though the draw they did ultimately secure halted a run of four straight defeats. Thomas Frank was lauded for his tactical creativity earlier in the campaign, though the Bees' rapid regression may force many to rethink their observations about the coach. A raft of players returning from the treatment room this week should aid Brentford's cause however, and they will need all hands on deck to stem the flow of goals at the wrong end.

Any good will for Rafa Benitez – which was scarce to begin with given his career history – is starting to evaporate after a run of four losses in five games for Everton. With injury problems mounting, the Toffees are playing like half a team at present and their weakness at defending from set pieces could be exposed by a Brentford team that excels from dead balls. The Blues have pocketed just one point from the last nine on offer at Goodison Park, while they have managed to claim just one point from the last 12 available on the road. 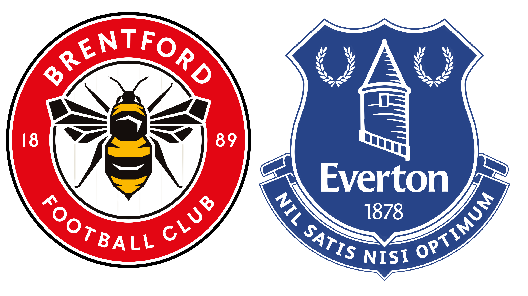 We recommend checking out the odds at NetBet for Brentford vs Everton.

Brentford are favourites to beat Everton this weekend.