These two sides are only separated by 2pts in the Premier League table and both are looking to bring an end to their recent winless runs. Brentford have the home advantage but a number of injury concerns heading into this weekend's clash, while the Eagles have form in their favour.

There is a very good chance that we will be treated to goals at both ends of the pitch this weekend. Both teams have scored in four of Brentford's last six matches in all competitions while five of Palace's last six games have also seen both teams score, adding further weight to our prediction for there being no clean sheets on Saturday.

Gallagher top scores for Crystal Palace in the Premier League this season with 7-goals and the on-loan Chelsea man has really impressed for the Eagles. Gallagher is due a goal having failed to find the back of the net in his last three outings and we're backing the talented youngster to score against a leaky Brentford defence on Saturday.

Can Brentford put an end to their losing streak this weekend?

Brentford weren't expected to take anything away from their trip to the league leaders in midweek but would have been hoping for a much better performance than the one that saw them knocked out of the FA Cup by Everton. Mahrez opened the scoring for the home side from the penalty spot 5-minutes before the break and in the second half, De Bruyne made sure of the points with a second goal in the 69th-minute. Brentford were beaten but not badly and there were some positives to take into the Palace game.

The Eagles would have been expecting a tough game away at a Norwich side that were in their best form of the campaign, which showed when Pukki gave the Canaries the lead in the opening minute. Palace put in a much better second-half display and equalised through Zaha on the hour mark. The very same player stepped up 3-minutes later to take a penalty but failed to convert and the game ended in a 1-1 draw.

Brentford: Toney, Janelt, Jorgensen, Fosu, Jeanvier and Eriksen are all doubts for this weekend's clash.

Crystal Palace: Kouyate could return for the visitors but Ferguson is confirmed out.

Your Questions for Brentford vs Crystal Palace 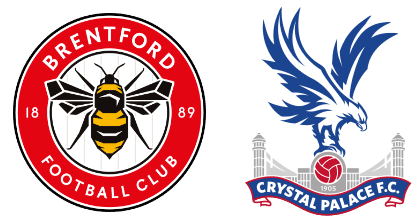