Two teams currently sitting in or near the relegation zone will meet on Wednesday, August 31st in the next Premier League round when Bournemouth hosts Wolves. Here's our preview of this game, so check it out.

Our Top Betting Tips and Picks for Bournemouth vs Wolves

If you want to check free Premier League betting predictions, including those for Bournemouth vs Wolves, you've come to the right place:

Bournemouth and Wolves to Draw

After this weekends duel against Liverpool in which they conceded nine goals, tied for a Premier League record, Bournemouth is hardly having a lot of confidence right now.

That being said, they still have three points, one point more than Wolves, after four rounds. So, we expect this to be a very close matchup and we wouldn't be surprised at all if the game ended without a winner.

Three of the previous five head-to-head duels between Bournemouth and Wolves have gone under 2.5 total goals and we don't expect to see a lot of goals in this game either.

After all, Wolves averaged just 1.50 goals per game in Premier League so far. However, Bournemouth averaged 4.50 goals per game, but that average is skewed due to their 9-0 loss to Liverpool. Wolves struggle to score any goals this season, so they can hardly put a lot of them past Bournemouth in this game.

The Best Odds and Useful Stats for Bournemouth vs Wolves

If you are looking for the highest odds for Bournemouth vs Wolves, here are some of the best odds for this game:

With both teams struggling at the moment, this can be a very important match for them. Let's check the teams out in more detail now:

The returnee to Premier League this season beat Aston Villa in the first round, but then they lost three games in a row during which they conceded sixteen goals and failed to score any. That being said, the schedule wasn't kind to them either since they had to play Arsenal, Man City, and Liverpool in those last three games, so their fans can take solace in the fact that the worst is likely over now.

Junior Stanislas, David Brooks, and Joe Rothwell are out of the upcoming game through injuries, while we could see Ben Pearson and Lloyd Kelly back in the team for this game.

For many years Wolves have been a stable member of Premier League, but their start of the new season is not a promising one and we could see the team fighting for survival this time around. After the first four games, Wolves are still without a win, although they drew in two of those four games.

When it comes to team news, Willy Boly and Chiquinho are currently out with injuries, while the rest of the team is healthy and ready to play. 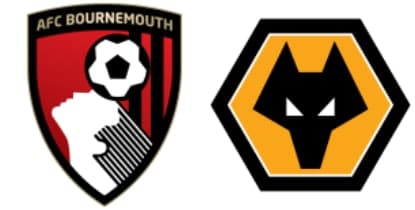