Ukraine prepare for the return trip of Bosnia-Herzegovina on November 16 after earning a draw on the road against the same rivals. They need a win to give themself a fighting chance of getting in the 2022 World Cup promotion slots.

Here are our predictions for Bosnia-Herzegovina vs Ukraine.

Defeat to Finland all but ended Bosnia-Herzegovina's chances for qualifying for the promotion slots of the 2022 FIFA World Cup. Ukraine are still in the hunt for that slot and need the three points on offer. Their last meeting resulted in a 1-1 draw and the Blue and Yellow will be gunning for an improvement. With a clear objective on their minds, we are backing the visitors to claim the win and add to Bosnia's woes.

Bosnia has only managed seven goals in their last five outings, four of these coming against Kazakhstan across two matches. Ukraine's attacking line-up has not lived up to their billing and expecting them to give a barn stopping performance is unlikely. Four of the visitors last five fixtures have concluded with less than three goals during regulation time and that trend will continue in this meeting.

Ukraine has failed to keep a clean sheet in their last six matches but if there was a time to shut out their rivals, it is now. Bosnia's scoring woes will be highlighted in this match as they continue without Edin Dzeko. On the other hand, the Blue and Yellows tally of just 9 goals from seven outings does not paint them in a good picture. We do not see both sides scoring in this low scoring affair, especially with little on offer for the hosts.

Bosnia-Herzegovina vs Ukraine: Check out the best odds and the latest stats

Match Preview of Bosnia-Herzegovina vs Ukraine: Petrakov's men to avail the last opportunity for Qatar placement

Finland were not supposed to thrash Bosnia-Herzegovina the way they did. However, it was the final nail in the coffin for the Dragons world cup qualifying aspirations. They are playing for pride in their final match up with the top-three sides of Group D battling it amongst themselves for honours.

Ukraine finds themselves in the bottom rung of the aforementioned top-three sides. Their hopes lie in securing a win on the road against Bosnia and hope that France defeat Finland. Anything but a win will be catastrophic and the Blue and Yellows are to blame themselves with six draws in seven outings.

Questions About Bosnia-Herzegovina vs Ukraine 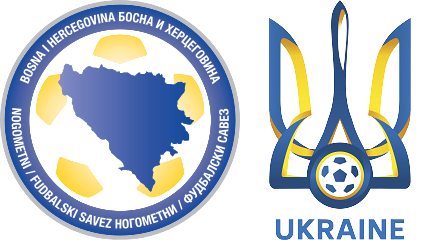 Where is the game being televised? COSMOTE Sport, DAZN Japan and Viaplay.

Where is the game being played? Bilino Polje (Zenica).