Bologna sit one place and 2pts behind Empoli in the Serie A but will be hoping to make the most of their home advantage and move above their guests and possibly into 11th spot with a win this weekend.

We're predicting that at least three goals will be scored on Sunday as five of the last seven meetings between Bologna and Empoli have ended the same way. Over 2.5 goals have been scored in three of Bologna's last four matches as well as in five of Empoli's last six fixtures, so you can see why we're expecting goals this weekend.

Marko Arnautovic top scores for Bologna in Serie A this season with 6-goals and while the Austrian international has failed to find the back of the net in any of his last 7-games for his club, we're backing the former Stoke City striker to score against Empoli this weekend. Empoli have a leaky defence and Arnautovic is bound to be presented with chances if Bologna play anywhere close to their best on Sunday.

Everything you need to know about Bologna vs Empoli

Bologna made the trip to Verona last time out where Orsolini gave the visitors the lead in the 14th-minute. However, this proved to be a false dawn for Bologna as Verona equalised in the 38th-minute and went on to win the game 2-01 thanks to a late strike from Kalinic. That result left Bologna sitting 13th in the Serie A table but a win this weekend would give them the chance to move up two places and into 11th.

Empoli would have been expecting a tough 90-minutes at home to Roma but they could not have expected to have been 4-0 down at the interval. Empoli did improve in the second half and managed to pull goals back through Pinamonti and Bajrami but due to the damage that was done in the first forty-five, the game ended in an inevitable defeat. Empoli sit on the same points as Sassuoloand will be hoping to move above them this weekend.

Bologna: Hickey is suspended, while De Silvestri, Urbanski, Amey, Barrow, Mbaye, Santander and Schouten could all miss out this weekend for the hosts.

Empoli: Marchizza, Luperto, Di Francesco, Parisi, Verre and Haas are all injury concerns for the visitors. 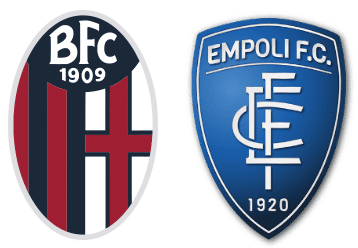