Derry City are looking good for the top three in League of Ireland right now. Can they tighten their grip on that position with a win here? Find out with our Bohemians vs Derry City match preview with free tips, predictions and odds mentioned along the way.

Points to be shared

We are well and truly unable to separate the teams in this game. Derry City are in the better general form but factor in the fact they’re away from home and it’s even stevens hence our prediction of a draw. Bohemians have won three of their last five home games whilst Derry City have won three of their past five on the road. As for head to head records, four of the last five meetings between Bohemians and Derry City have ended level.

Our next Bohemians vs Derry City prediction is that both teams find the net in this game. Bohemians have scored in each of their last four home games racking up a total of seven goals scored. Derry City meanwhile have scored in four of their past five away games having notched a total of eight goals. With neither side exactly goal shy, the idea of goals at both ends is hardly too out there. Each of the last seven games between the pair have seen both sides register goals as well.

A clash between two sides with European ambitions

This game is an intriguing one. Derry City are currently in third place with eyes on second and, more ambitiously, the title isn’t gone yet either. That said a Bohemians win here would put them just nine points off their visitors with a game in hand.

Bohemians’ form hasn’t been great of late with just one win in four. On their own patch though it’s been a different story where they’ve not lost in four. Keep your eyes on Dawson Devoy as their key man.

Derry City are very much in the hunt for European football next season as they sit in the top three. Their recent form has been reasonable though with no loss in four whilst their away form is the best in the league. If Jamie McGonigle can get back amongst the goals here it would be a real boost as well.

A quickfire FAQ on Bohemians vs Derry City 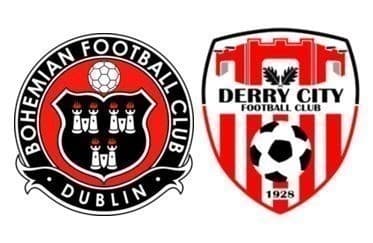