Top free betting tips and odds for Dortmund vs Bochum

Following the successive two defeats, Dortmund goes up against Bochum in the next Bundesliga Fixture. Die Unabsteigbaren are also struggling for a win from the last three games.

Dortmund lost their previous league outing against Bayern Munich but they had two wins in a row before that. The BVB also recorded three victories in the last five home attempts.  On the other hand, Bochum has lost their previous two Bundesliga outings consecutively and the away games have also been unfavourable for them where they won only of the last seven. The previous meeting between the teams ended in a draw at the home of Die Unabsteigbaren but Dortmund fancies their chances in this home advantage.

Dortmund arrive home again after scoring two goals in the previous attempt and yielded a total of 16 goals in the last five home games. Bochum’s attack has failed in the recent meetings but they still managed to hit on the target five times in the last five away outings. Adding more, four of the previous five H2Hs between these teams concluded with over 2.5 goals and will be looking for the same pattern again in this game.

Dortmund vs Bochum: Check out the best odds and the latest stats

Dortmund vs Bochum: Check out the team lineups

The BVB got their second defeat in a row in the last game against Dynamo Kyiv, playing in a club friendly match. But having a run of 20 wins and three draws in the 31 rounds of the Bundesliga Campaign, Dortmund are only just behind the leaders. The club manager Marco Rose will report 12 injury issues in the team while Emre Can will be on suspension before this game.

Die Unabsteigbaren continued their regression and dropped three points again in the last game against Augsburg, playing at home. After losing a total of 15 duels in the 31 attempts of the season, Bochum are currently at the thirteenth position in the points table and eight points behind the relegation area. The club gaffer has zero fitness concerns in the team but two players are on the suspension ahead of this game.

Questions About Dortmund vs Bochum 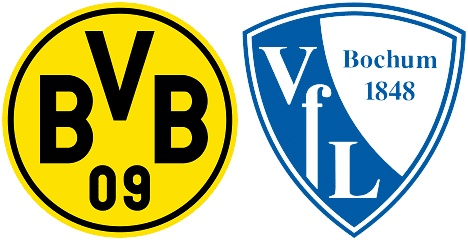 Where is the game being televised? beIN Sport Max (Fra), Nova Sports, Sky Bundesliga, and Viaplay.

Where is the game being played? Signal Iduna Park (Dortmund).