Bayern Munich to Win First Half

Bayern Munich were undone by Villarreal in the Champions League but will hope for better fortunes in the Bundesliga. They have their work cut out for them as an in-form Augsburg pays them a visit at the Allianz Arena.

Munich to get going from the opening whistle

The struggling Yellow Submarines were supposed to bow down to the Bavarians but it did not pan out as the visitors had hoped. A 1-0 defeat in the first leg will need to be overcome next week but Bayern's attention will be occupied by Bundesliga's responsibilities. Augsburg arrives amidst much fanfare with two wins in succession. They won the reverse leg, giving Munich more impetus to return with aplomb. Expect the champions to exact vengeance over their rivals and get started from the opening bell.

Goals to shower at both ends

Julien Nagelsmann's tactics have worked for Bayern Munich this season as they romp towards another Bundesliga title. However, their reinforced defence has failed to live up to their billing. While the attackers have done their job, the backline has been breached far too regularly. Augsburg profited from this in the return leg and with five goals in their last two outings, will be confident about their chances. Expect goals at both ends of the Allianz Arena as these sides give fans and neutrals much to cheer about.

Bayern Munich vs Augsburg: Check out the best odds and the latest stats

Bayern Munich vs Augsburg: Check out the team lineups

The midweek Champions League outing saw Bayern Munich's momentum stopped by Villarreal. As they return their attention to the Bundesliga, they have to look at ghosts of their past. Augsburg earned an unlikely victory over them in the reverse fixture and arrive at the Allianz Arena in good form. With Borussia Dortmund keeping trail, the champions can complicate matters for them if they fail to get anything but a win from this meeting.

With three wins from their last four outings, Augsburg fans will be pleased with their performances. Visits to the Allianz Arena are never easy but taking on a jaded Bayern Munich makes matters easy for them. A win will add them into a select group of teams to get a double over their Bavarian neighbours. They stand at the cusp of history and will take the match to the hosts to add further distance between themselves and the relegation slots.

Questions About Bayern Munich vs Augsburg 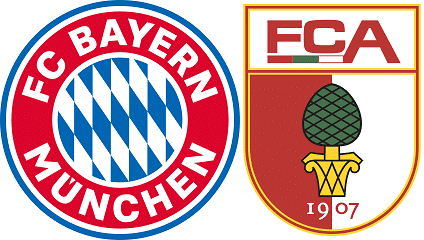 Where is the game being televised? beIN Sport (Fra) and Sky Bundesliga.