The final game in La Liga for Sunday is also the derby of the round – the Barcelona vs Sevilla duel. With that in mind, we have prepared an in-depth preview of this match for you, along with some free betting tips.

Our favourite betting predictions for Barcelona vs Sevilla

If you are not sure what is the best bet for Barcelona vs Sevilla, take a look at our top betting tips for this game:

At the moment, Sevilla is still three points ahead of Barcelona, but the Blaugrana has one game left to play. In any case, Barca will have the same number of points as Sevilla if they beat them on Sunday and they can put some pressure on Real Madrid ahead of the final stretch of the season in La Liga.

More importantly, Barcelona is in fantastic form with five straight wins, including the demolition of Real Madrid in the last round. So, we can definitely see them getting three points from this game as well.

All five previous h2h meetings between Barcelona and Sevilla have gone under 2.5 total goals and we wouldn't be surprised if that happens again in their next game.

The latest odds and key stats for Barcelona vs Sevilla

If you don't want to spend your time looking for the best Barcelona vs Sevilla odds, check them all out on our website:

This is the derby of the round in La Liga and we expect an interesting game. So, let's take a closer look at both teams:

With seven wins in their last eight games in La Liga and with thirteen wins without a loss, it's clear that Barcelona is the hottest team in the league right now. Furthermore, Blaugrana enters this game after beating Real 4-0 in Madrid, which should put a bit of a pressure on Real in the title race, although Barcelona is still twelve points behind them.

In any case, Barcelona will once again bet without Ansu Fait, Samuel Umtiti, Sergio Roberto, and Sergino Dest, who are currently injured or still not fit enough to get back to playing.

Although Sevilla was the only team seriously trailing Real Madrid so far, Barca's amazing form now sees them looking over their shoulders to keep the second spot in La Liga. In fact, Barcelona can tie Sevilla in points if they win their upcoming matchup, which seems likely to happen since Sevilla is not in great form now with four draws in the last five games.

Sevilla is also struggling with serious personnel issues and injuries and they will bet without Suso, Marcos Acuna, Alejandro Gomez, Karim Rekik, Fernando, Thomas Delaney, Yassine Bounou, and Rafa Mir for the game against Barcelona.

Q & A for Barcelona vs Sevilla 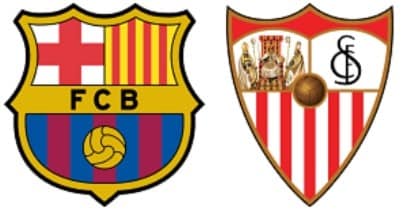