The final game of the mid-week La Liga round is the Real Sociedad vs Barcelona duel. With that in mind, we have prepared a detailed preview of this game, along with some free betting predictions.

If you are searching for free La Liga betting tips, including our top tips for Real Sociedad vs Barcelona, check them out right here:

We've seen three or more goals in three of the last four head-to-head duels between Real Sociedad and Barcelona. Furthermore, we saw thirteen goals in their last two duels alone.

With that in mind, we expect this game to go over 2.5 total goals, despite the fact that Real Sociedad averaged just 1.94 goals per game in the league this season, which is the worst average. After all, Barcelona averaged 2.97 goals per game in La Liga so far.

Since we expect to see at least three goals in this game, we also expect both teams to score. After all, that happened in the last four h2h meetings between these two teams.

That being said, both teams scored in just 28% of all Real Sociedad matches in the league this season, while the same thing happened in 58% of all Barcelona games in La Liga until now.

The best odds and key stats for Real Sociedad vs Barcelona

If you wish to bet on the top Real Sociedad vs Barcelona odds, check our list of odds taken from the best UK betting websites:

This duel is probably the derby of the round, so let's take a closer look at both teams ahead of their meeting:

After sitting at the top of La Liga for a while in the first half of the season, Real Sociedad dropped in form and down the standings, but they've done well lately with three wins in the last six games. The team is still in good position since they are sixth in the league, so they have a good chance to fight for a spot in European competitions.

However, some of the key players of this team are out with injuries, including Nacho Monreal, Ander Barrenetxea, Mikel Oyarzabal, and Carlos Fernandez, while David Silva will miss the game to serve a suspension.

Blaugrana enters this game after a two shocking results – a loss to Frankfurt at home that lead to their elimination from Europa League, and a loss to Cadiz, once again at home, in the last round of La Liga, which ended their streak of fifteen games without a loss in the league. So, the team clearly needs a boost of confidence and they'll look for it against Real Sociedad, which is a tough task.

Meanwhile, Barcelona will be without Pedri, Samuel Umtiti, and Sergi Roberto, while Ansu Fati and Gerard Pique are questionable, with the latter more likely to play and start the game. 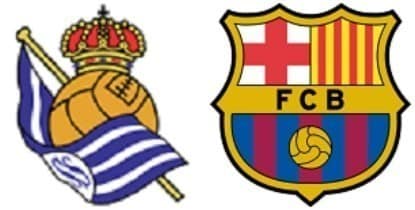