The last game to be played on Saturday in La Liga is the Real Betis vs Barcelona duel, which should be a very interesting game. So, let's take a closer look at the teams and our free betting tips.

Our best Real Betis vs Barcelona predictions and picks

If you are not sure what is the best bet for Real Betis vs Barcelona, check our top betting tips for this duel:

The home team is still hoping to make the Champions League next season and for that they need to keep winning and hope for Atletico Madrid to slip up. Meanwhile, Barcelona basically secure their place in the top European competitions.

And while Barcelona is in a bit better form, Real Betis has also done well lately. The winners of Copa del Rey this season already beat Barcelona once in the first half of La Liga, so we don't see why they can't do it again at home, in front of their fans.

Although the last duel between Real Betis and Barcelona ended with just one goal, we've seen a minimum of five goals in four h2h meetings between these teams before that.

The best odds and important stats for Real Betis vs Barcelona

If you want to bet on the top La Liga odds, including those for Real Betis vs Barcelona, we can help you out:

This is one of the more interesting matchups in this round of La Liga, so let's take a closer look at both teams:

By winning Copa del Rey this season, Real Betis secured a spot in Europa League for next season. However, they are just three points from Atletico Madrid in the fourth place and a spot in the Champions League. So, Los Verdiblancos will go all in against Barcelona to try and keep the hopes of finishing fourth alive. In the last six games, Betis has two wins, three draws, and one loss.

Real Betis could again be without Marc Bartra, Victor Camarasa, William Carvalho, and Martin Montoya, who are still dealing with injuries. On the bright side, Paul Akouokou is available again following a suspension.

Four games remain in La Liga season and Barcelona is currently in the second place and they are very close to securing a spot in Champions League for next season. While that is good, this has been a bad season for the team overall since they will end it without any trophies. In any case, Barcelona has four wins and two losses in the last six matches in the league.

When it comes to team news, Barcelona will likely be without injured Gerard Pique. However, the rest of the team is either full healhty or just lacking a bit of fitness after dealing with injuries. 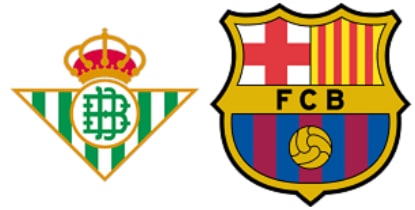