The last match scheduled for Sunday in La Liga is the Barcelona vs Osasuna duel. With that in mind, we have prepared an in-depth preview of this game, plus some free betting tips.

Our top betting predictions and picks for Barcelona vs Osasuna

If you are searching for the best La Liga betting tips, including our predictions for Barcelona vs Osasuna, you can find them right here:

Blaugrana is in great form right now with five wins in the last six games and they are without loss in the last eleven matches in La Liga. However, Osasuna is not in such a bad form either.

But there is not doubt that Barcelona will win this game, at least in our minds. So, our prediction is for Barcelona to beat Osasuna by two or more goals.

Four of the previous five head-to-head duels between Barcelona and Osasuna have gone over 2.5 total goals and we expect that to be the case once again on Sunday.

The best stats and highest odds for Barcelona vs Osasuna

If you are trying to find the top Barcelona vs Osasuna odds, check our selection of odds taken from some of the top bookmakers:

While the home team is the favourite in this game, this can still be an interesting match. So, let's check both teams out in more detail:

With five wins and a draw in the last six games, Barcelona is clearly in great form right now. After all, the team has been unbeaten in La Liga in the last eleven games. Thanks to this amazing run, Blaugrana reached the third spot in the standings, but the team is too far off when it comes to any title race since Real Madrid is fifteen points ahead of them.

Barcelona will once again be without Ansu Fati, Sergi Roberto, Alejandro Balde, and Samuel Umtiti, who are all injured at the moment. Also, Nico Gonzalez will miss the game to serve a suspension.

The team from Pamplona is in solid form since they have three wins, one draw, and two losses in the last six games. Overall, Osasuna is right in the middle of the standings and they are likely going to stay there until the end of the season unless they can go on a very good or a very poor run.

Meanwhile, the team will be without Jesus Areso once again through injury, while Avila is out of this game through suspension. Otherwise, Osasuna is in pretty good shape when it comes to team's health. 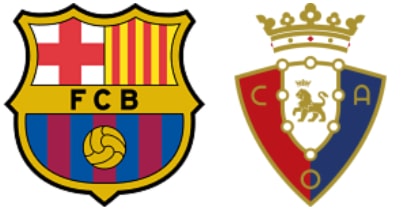