Top free betting tips and odds for Augsburg vs Mainz

After a magnificent victory against Wolfsburg, Augsburg has another home game in their next Bundesliga fixture against Mainz. The Carnival Club make an appearance after losing two points in their last game.

Both teams enter this field after having a mix of results recently, losing and winning twice in the last five attempts. Augsburg has made the home advantage in their favour and remained unbeaten in six of the previous seven home duels. However, Mainz are not getting improvements in the away challenges and are yet to win a game from the last nine games away from home. The hosts seem in the better form currently for this game and are likely to have a lead in this game.

Augsburg have scored in all of the home meetings against Mainz and three of those previous five ended with a BTTS outcome. adding more, regardless of the lack of wins in the recent games, the hosts scored in their all recent games as well. The Carnival Club also missed the chance only once in the last seven attempts. So there seem high chances to see a BTTS pattern once again in this clash.

Augsburg vs Mainz: Check out the best odds and the latest stats

Augsburg vs Mainz: Check out the team lineups

Fuggerstadter got an ideal victory of 3-0 in their previous game against Wolfsburg and clear the lead of three points from the relegation zone. Augsburg are now at the fourteenth place with an advantage of one game in hand to get the advancement. The club manager Markus Weinzierl will not be happy to have six players out of the squad due to injury issues.

The Carnival Club equalized the lead in the second half and clipped the hosts, Monchengladbach, to a 1-1 draw in their previous game. Mainz secured 11 victories in the 27 games of the season but 11 defeats made them stay at the tenth position of the points table. Similar to the next rivals, the 05ers have also a game in hand over many other teams. Jeremiah St. Juste and Delano Burgzorg will be on the injury list coming into this game.

Questions About Augsburg vs Mainz 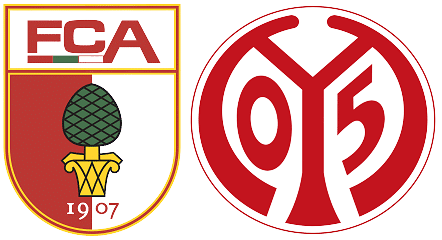 Where is the game being televised? beIN Sport (Fra), and Diema Sport 3.