Athletic Bilbao meet Espanyol at the San Mamés Barria in a La Liga tussle on Sunday September 4th. The hosts put their unbeaten start on the line when they entertain Espanyol. Read our free predictions and find the latest odds for the fixture below in our detailed match preview.

Athletic Bilbao are aiming to win for the third game in a row in La Liga when they welcome Espanyol to the Basque Country. Read our top predictions for this weekend’s fixture below.

Athletic Bilbao have made a strong start to the new campaign in Spain and their thumping 4-0 win at Cadiz last week brought their points haul up to seven from the first nine on offer. In contrast, Espanyol have claimed just a single point so far and their confidence should be low following successive defeats to Rayo Vallecano and Real Madrid. Athletic have momentum and home advantage on their side here and we expect that powerful combo to drive them towards glory again.

Espanyol’s defending has been well below par so far this season and the strugglers have conceded the second-most goals in the division (7) since the summer. Alongside that dismal overall record, Diego Martínez’s side have shipped at least two goals in all three of their first assignments in La Liga and on Sunday, they face an Athletic frontline that plundered four goals in their last outing. The hosts should have more chances to bury this weekend and we recommend backing them to notch over 1.5 times.

Top Betting Odds and Stats for Athletic Bilbao vs Espanyol

View our list of the best stats for Sunday’s contest below alongside a tool to help you choose the most lucrative odds.

Read all of the latest injury updates and team news for Sunday’s La Liga bout between Athletic Bilbao and Espanyol below.

Athletic Bilbao have a few injury concerns this week including defenders Inigo Martinez, Yuri Berchiche and Mikel Balenziaga, though the last member of the trio could make the squad on Sunday. Attacker Inaki Williams has a sprained ankle however, and is expected to be out for a week or two.

Defender Adria Pedrosa is out until October with a hernia, though Pol Lozano should be back in time from a minor ailment to join the squad. Espanyol have two players suspended for Sunday – keeper Benjamin Lecomte and defender Sergi Gomez. 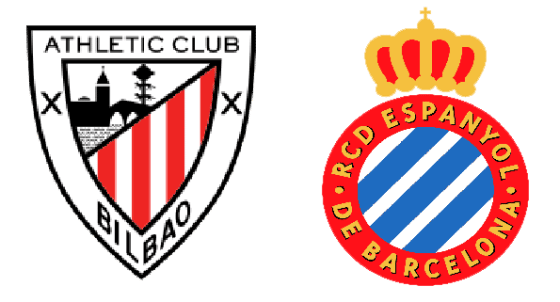 Stake and 888sport have the best odds for Sunday’s game between Athletic Bilbao and Espanyol.

Real Madrid currently sit top of the pile in Spain.