Stade Raymond Kopa will host the match between Angers and Saint-Etienne on the last weekend of January 2022. Will the Black and Whites continue their resurgence in the league? If you want free betting tips, competitive odds and predictions, you need to look no further.

Our best predictions and betting odds for Angers vs Saint-Etienne

Saint-Etienne is on a run of seven losses in the league. This run of poor performance has left them rooted at the bottom of the Ligue 1 table. Angers got the much-needed confidence boost from their last game by securing a 2-1 win over Troyes. Pascal Dupraz will employ all his wits to convince the board that he is still the best manager to lead Saint-Etienne in this fixture. Below are our top free tips on Angers vs Saint-Etienne clash:

Saint-Etienne is still searching for the first victory in the league after making seven attempts. To make matters worse for Saint-Etienne, they lost their last three games in the league without registering a single goal. We expect the away goal-drought to continue in this fixture. Angers on the other hand have shown whiskers of hope in the league. After securing a draw against Lorient to bring an end to their poor run in the Ligue 1, Angers got another shot on the arm by beating Troyes in their last game. Angers come to this fixture with lots of confidence. They are five points shy of European competition places.

Angers vs Saint-Etienne Team Stats and the Best Betting Odds

Saint-Etienne knows that this is one team against which they can easily get points. In their recent nine matches, Saint-Etienne has beaten Angers three times. During the same period, Angers managed two wins against Saint-Etienne. Four encounters ended all square between these teams. The statistics indicate that this is going to be a very competitive game. It will be an opportunity for Saint-Etienne to search for a familiar result while Angers will also view the chance as perfect to make a top-table campaign statement. However, we anticipate home advantage to play a critical role in this game. Moreover, the current forms of these teams speak lots of volume towards where the game will go.

There has been one encounter between head coaches of both teams. With that, we expect a supremacy battle in this second meeting between the two tacticians. Hosting head coach, Gerald Baticle, averages 1.24 points in 21 games while his matchday opponent, Pascal Dupraz, averages 1.20 points after five matches. The visiting coach prefers the 4-2-3-1 formation. On the other hand, Baticle changes formation often.

FAQs about Angers vs Saint-Etienne 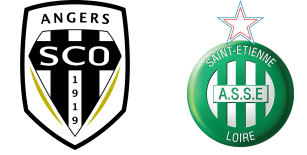 Who will referee the match between Angers vs Saint-Etienne?

Clement Turpin will be the referee for the match between Angers and Saint-Etienne.

What is the current form for angers coming into this fixture?

The form of Angers is LLLDW.

When is the game between Angers and Saint-Etienne scheduled?