The last game of this La Liga round is the Alaves vs Barcelona duel. With that in mind, we have prepared an in-depth preview of the game for you, along with some free betting tips.

Our favourite betting predictions and tips for Alaves vs Barcelona

If you are not sure what is the right bet for the Alaves vs Barcelona duel, check our top betting picks for this match:

After a tough week in which they lost the Spanish Super Cup and were eliminated from Copa del Rey, Barcelona will be looking for a win to raise their confidence.

A duel with Alaves, a team that's without a win in the last nine La Liga matches, sounds like a perfect opportunity for redemption. So, our prediction is for Barcelona to win this game.

Three of the last five head-to-head duels between Alaves and Barcelona have gone over 2.5 total goals and we expect the same thing to happen in their upcoming match as well.

The highest odds and key stats for Alaves vs Barcelona

If you are looking for the best La Liga odds, including the top odds for Alaves vs Barcelona, check them all out right here:

While the guests are the clear favourites in this game, this could still be an interesting game. So, let's take a closer look at both teams now:

The short run of good results by Alaves was once again replaced by a prolonged run without a win in La Liga – the poor streak now stretches to nine games without a win for Alaves. The team found itself back in the relegation zone and they are currently three points behind the first team outside of it.

On the bright side, Alaves doesn't have a lot of problems when it comes to team shape since only Ruben Duarte and Ximo Navarro are due to miss the next game with injuries.

The last week has been eventful for Barcelona, but not in a good way. The team was first eliminated in the Spanish Cup semi-finals by their fierce rivals Real Madrid. Then, a few days later, Barcelona was also eliminated from Copa del Rey by Athletic Bilbao after losing the game after extra time. So, Blaugrana is in desperate need for a good result now and the fans are hoping that Alaves will pay the price.

The situation at the club is not great, as was the case most of the season. Umtiti, Fati, Wague, Garcia, and Sergi Roberto are definitely out with injuries, while Depay remains questionable. On top of this, Gavi is suspended for this game, while Dembele is in a clinch with the club and unlikely to appear in any games after his recent outburst.

The most common questions for Alaves vs Barcelona 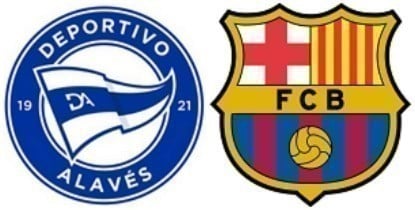