Ajax arrive here as massive favourites to win the game. Will Cambuur be able to spring a shock? Find out with our Ajax vs Cambuur match preview with free tips, predictions and odds mentioned along the way.

Forget talking about who will win and who will lose; this game should be about how many Ajax will win by. They've kicked off their season in perfect form with four wins on the spin and currently have a +9 goal difference from those matches. Cambuur meanwhile sit on a goal difference of zero but, notably, have just the one win to their name. The key driver of our minus two goal handicap though can be found from a fixture in September 2021 – a year ago. Ajax beat Cambuur 9-1 in that match. We don't think it will be that bad this time but there will be a few goals in it!

We've just touched on a high scoring match that these two played out last year with a combined 10 goals between them and we think this match will see a fair few goals as well – probably not 10 though! For the purposes of this tip, we're focussed on Ajax rather than Cambuur because the hosts will be dictating how the play unfolds; they've averaged 3.8 goals per game so far this season.

Here are the key stats & form guide for Ajax vs Cambuur

It could get ugly for Cambuur, couldn't it?

Cambuur have made a reasonable start to the season but they'll be doing very well to get anything as they visit the Johan Cruyff Arena. Ajax, who have had a summer of change having lost their manager and a couple of big name players, are looking very good at this early stage and will be looking to chalk up another three points here.

Not only do Ajax arrive into this game with home advantage, with a better head to head record and in stronger form but they've got pretty much a clean bill of health too with just Charlie Setford guaranteed to be on the sidelines. They've obviously lost a couple of big names in the transfer window but that just means those that remain will have something to prove.

Cambuur's squad isn't on the bare bones of things but they have got a few players missing as they travel for what could be their toughest game of the season. Jamie Jacobs (suspended), Dan van Kaam and Maxim Gullit (injured) are all set to miss out.

A quickfire FAQ on Ajax vs Cambuur 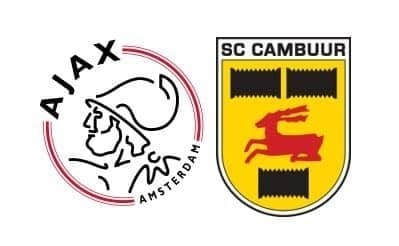