AIK to Win to Nil

AIK and Mjallby meet in Solna for an Allsvenskan fixture on Saturday, July 2nd. AIK put their unbeaten home record on the line when they face Mjallby. Read our free predictions and find the latest odds for the fixture below in our detailed match preview.

AIK have won five out of six home games this season ahead of their latest test at the Friends Arena against Mjallby on Saturday. Read our top three predictions for this weekend’s fixture below.

AIK to Win to Nil

AIK are level on points with leaders Hacken in the Allsvenskan after 12 matches and their strong start to the campaign has been powered by some excellent wins at home. AIK have won five of their first six games at the Friends Arena, keeping an impressive five clean sheets along the way and their defensive solidity means they are worth backing to win to nil again on Saturday against a Mjallby outfit that failed to notch in each of their last four away assignments.

AIK have been pocketing plenty of points in the early exchanges of the new Allsvenskan season, though they have been posting relatively modest figures in the final third. They’ve scored just 18 times in 12 outings so far, while five of their six tussles in Solna have produced under 2.5 goals. Their mean defending is the driving force behind their low-scoring contests and we’re tipping their clash with Mjallby this weekend to follow the same pattern.

Top Betting Odds and Stats for AIK vs Mjallby

View our collection of the best stats for Saturday’s game below alongside a tool to help you choose the best odds.

Read all of the latest injury updates and team news for the Allsvenskan skirmish between AIK and Mjallby on Saturday below.

Axel Björnström will sit out Saturday's game through suspension following an accumulation of yellow cards, but apart from the defender, AIK have a strong squad to pick from this weekend. AIK drew their last match 1-1 at Degerfors on Sunday.

Herman Johansson is sidelined through suspension for Mjallby this week, though injury issues elsewhere are few and far between for Head Coach Andreas Brannstrom. Mjallby are in the midst of a five-game winless run and they have dropped down to 9th spot as a result. 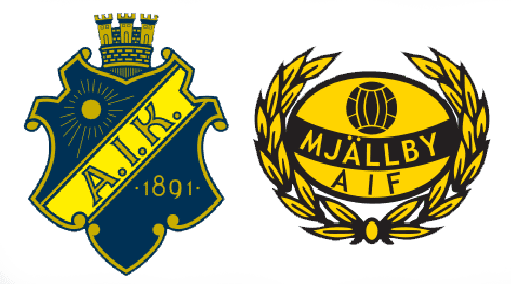 AIK vs Mjallby will be contested at the Friends Arena in Solna.

AIK have been priced as clear favourites to beat Mjallby on Saturday.