For a manager who became the first to win consecutive European Cups in the Champions League era, relatively little is written or said about Zinedine Zidane's tactics and football philosophy.

This could be because there are no obvious common themes to latch on to when it comes to the public perception of his style of play, or maybe it’s because Zidane himself appears much more reserved and less animated in comparison to football’s often extrovert, eccentric, and almost quirky popular tactical brains.

Tactical interest seems to begin with the manager’s character or backstory, such as the romantic notion of Pep Guardiola driving through the night to visit the football obsessed Marcelo Bielsa.

He travelled to various clubs, as many young coaches do, to take in different cultures, styles, and training methods. He also observed Bielsa, visiting the Argentinian at Marseille in December 2014, and a few months late he travelled to Munich’s Säbener Strasse to take in Guardiola’s training sessions along with several other budding French coaches including Claude Makelele.

But the Frenchman’s main influences come from those he played under and those he worked with early on in his managerial career. And when you've played the game to such an elite level, as Zidane did, his influences also come from himself.

He enjoyed successful spells as a player under Marcelo Lippi and Vicente Del Bosque at club level, and Aimé Jacquet with France.

Lippi emphasised the importance of the team unit, but also recognised that to get the best from that team, the tactics had to be built around the strengths of the individual players within it.

Del Bosque, like Zidane, was an unassuming, outwardly serene but strong willed manager who might not fit the preferred view of a modern tactician. But he helped Spain to a World Cup followed by a European Championship in 2010 and 2012 by getting a talented bunch of individuals to function as one.

“More than anything it's about instilling a mentality. Before '98, there wasn't the mentality, even among the senior players. We were hesitant, unsure of ourselves. Not any more. And success breeds success.”

After hanging up his boots Zidane took charge of Real Madrid Castilla: the club’s reserve side who also play in the Spanish league system. Managing this team gave him a similar experience to that which Guardiola had at Barcelona managing their B team, and Zidane was able to take notes from first team coaches Carlo Ancelotti and Rafael Benítez.

Benítez’s stint was brief but Zidane will have still taken on board some of the methods used by the respected Spanish manager, before eventually taking over from him in January 2016. 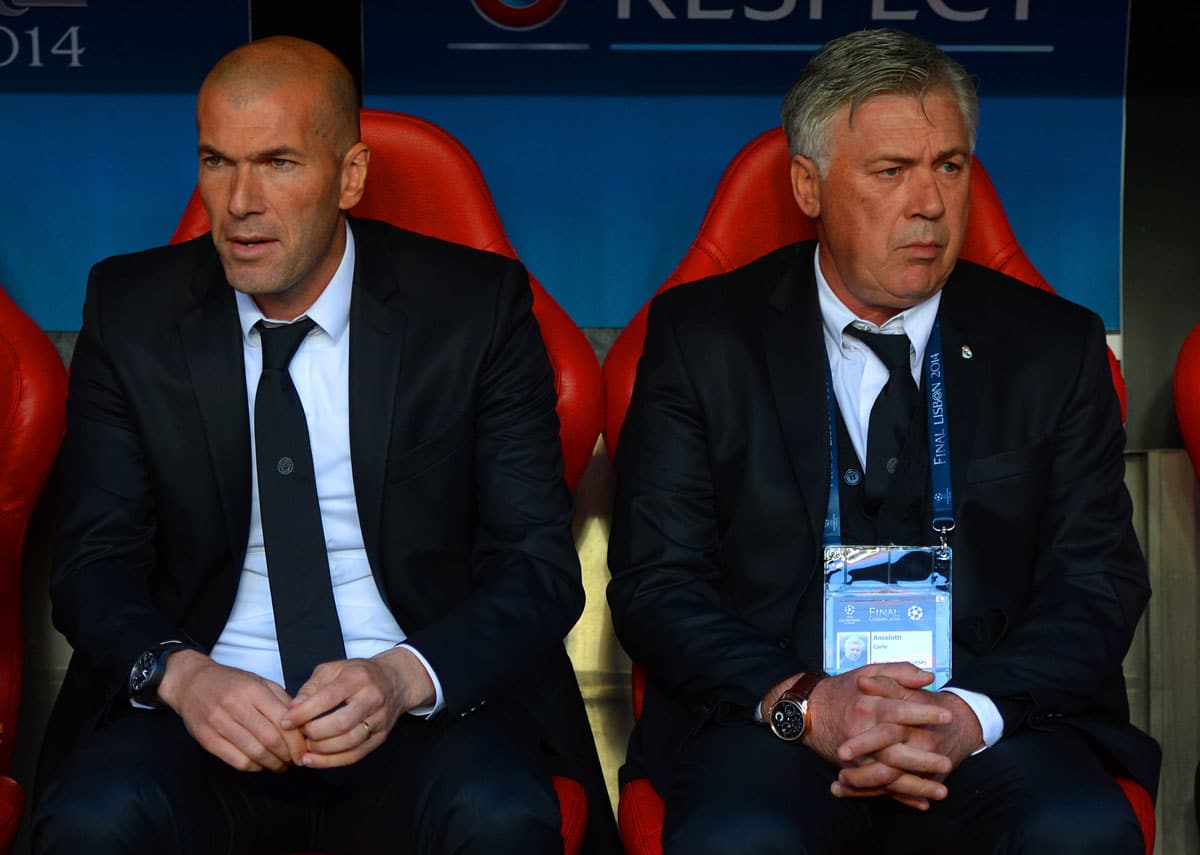 Prior to this, his work alongside Ancelotti shaped much of his early managerial traits, not least because the Italian is another of those managers who, while outwardly self-effacing, achieves great success thanks to their man management style behind the scenes.

“Zidane isn't aloof, but rather very personal,” wrote Marca’s Aldo Sainati. “His one on one coaching is some of the best in the game, precisely because he can draw on his past as a player, and what he's learned from Ancelotti.”

Having been in the job less than six months, Zidane had guided Los Blancos through the Champions League knockout stages to the final. After knocking out Roma, Wolfsburg, and Manchester City, and building on Benítez’s good work in the group stage, he faced local rivals Atlético Madrid in the final.

Diego Simeone’s side were a tough nut to crack, and had come within seconds of defeating Real in the final two years previously, before Sergio Ramos and all that.

The 2016 final was equally as competitive, as Diego Godín and Stefan Savic defended deep in order to keep the attacking trident of Gareth Bale, Karim Benzema and Cristiano Ronaldo at bay. They were sometimes too deep, however which allowed space between the midfield and defence.

Zidane set up using a very balanced 4-3-3 formation, and in some ways his side looked to play Atleti at their own game. Dani Carvajal kept an eye on the advancing Brazilian full back Filipe Luis, while the midfield three of Luka Modric, Toni Kroos and anchor Casemiro protected the back four with their compact, disciplined shape. 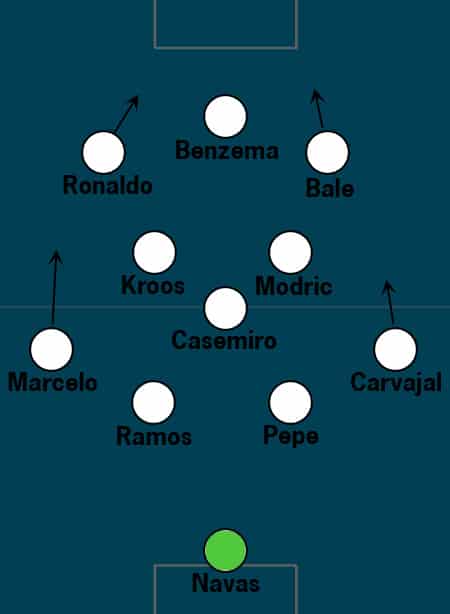 Real had just 48 per cent possession in the game as Ramos' early goal encouraged them to sit back and absorb the pressure from Simeone’s side, who Zidane knew weren’t used to breaking sides down by dominating possession.

In the end Real conceded a penalty which made it 1-1 and the game went to extra time, with Los Blancos eventually winning on penalties. Was the fact they didn’t miss a single spot kick an early sign of the mental strength their manager had instilled?

Though it was undoubtedly a learning curve for their new boss, he’d already demonstrated a willingness to adapt his tactics to give them the best chance of defeating a defensive, counter-attack favouring opponent.

In Cardiff, a year later, many of the players remained but the tactics had changed.

One player in particular had been behind this change, and Isco’s presence in the place of Bale, who had missed much of the season through injury, was one of the more interesting tactical aspects of this game. 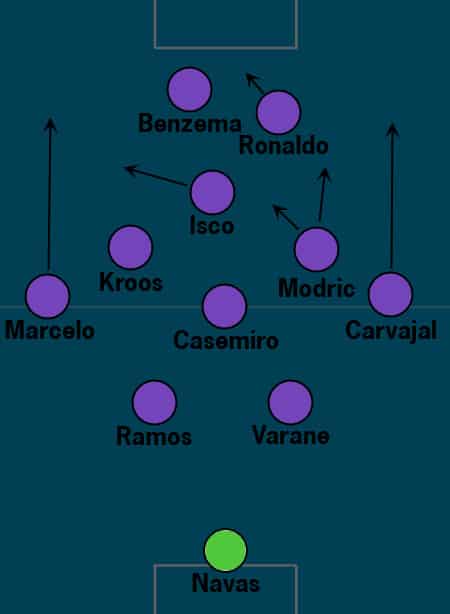 A change to a 4-4-2 diamond appeared to be solely down to Isco’s presence, but it also suited every other player on the pitch.

Marcelo and Carvajal were free to provide the width in their role somewhere between full-back and winger, while Casemiro was able to cover behind them to help the defence which now contained the extra pace of Raphaël Varane alongside Ramos.

Perhaps most importantly, the 4-4-2 allowed Ronaldo to play something of a free role around Benzema up front. The Portuguese star’s explosiveness is now limited to a few yards in and around the area, rather than the entire attacking third as it was in his younger days, but these few yards can be the most important on the pitch, and so it turned out.

Ronaldo stole into the box to get on the end of Modric's cross to score the third goal which really killed the game off. Both full-backs emerged from the game with assists, while the only goal they conceded was a sensational, unstoppable overhead kick from Mario Mandzukic.

Going forward it will be interesting to see how Zidane re-introduces Bale, and if he does, will he change his system yet again in order to do so. Early on this season he's occasionally used him as a striker, as well as on the left wing — both positions he's rarely played for Madrid — and it'll be interesting to see if these are ploys he uses more regularly this season.

It’s possible to analyse Zidane’s tactics, just as it is for any other manager, and if anything they’re more interesting as they can change on a game-by-game basis. However, this doesn’t lend itself to creating a particular identity in terms of shape and style, which can then lead to the impression that there isn’t one.

When asked about their tactics, many managers will dismiss the idea of formations, responding with the notion that each player has a certain role, rather than the team having one defined shape. But despite this these roles are often so defined and used so regularly that they produce a common theme in terms of formation.

Zidane has taken this to the next level, and rather than have players who fit certain roles in a formation, he uses the players’ natural gifts to determine their role and ultimately the shape, which is also based on the opposition. This results in the regular formation changes, however subtle they sometimes are.

“I always said he had what it takes to be a good manager,” Ancelotti said recently.

“Your experience as a player is only partially useful when you become a manager, because you also have to study, you have to keep up to date and gain your own experiences. Zidane has done that. He's charismatic and the players really respect him, and that's very important.”