Today's Predictions for Wolves vs Southampton

Two teams in good form go head-to-head in the Premier League this weekend as Wolves play host to Southampton. Wolves have played one game fewer than their guests yet sit 4pts clear of the Saints in 8th place but Southampton could move into the top half of the table with a win.

We're predicting a draw on Saturday as both teams head into the game in good form. Wolves might be the favourites with the bookmakers but the home side hasn't won in any of the last six meetings between these two clubs and two of their last three encounters at Molineux have ended in 1-1 draws. Wolves head into the game unbeaten in their last four matches in all competitions, while Southampton haven't lost any of their last five games in league or cup.

While Wolves don't tend to score or concede many goals in their games, we're backing both teams to find the back of the net this weekend. Both teams have scored in five of the last seven meetings between the pair and each of Southampton's last five fixtures have ended with both teams getting on the scoreboard. The Saints look good in front of goal right now but still have plenty of work to do in defence, scoring 13-goals and conceding 11 in their last six outings.

All you need to know ahead of Wolves vs Southampton

Wolves had the home advantage against Championship side Sheffield United in the 3rd Round of the FA Cup. The Premier League side dominated the match from start to finish and much to the surprise of their fans, Wolves scored more than one goal in the game. Podence put the hosts in front after 14-minutes and in the second half Semedo made it 2-0 in the 72nd-minute and Podence bag another goal 10-minutes from time to wrap up a 3-0 victory.

Southampton were in action in midweek for their rearranged game with Brentford. The Saints opened the scoring in the 5th-minute through Bednarek but Brentford equalised in the 23rd-minute. An own goal from the unfortunate Fernandez restored Southampton's lead before the break and just minutes after the restart Broja made it 3-1. A fourth from Adams confirmed all 3pts for Southampton who thoroughly deserved their victory.

Wolves: Neto, Mosquera, Jonny, Hwang and Boly are all injury concerns, while Saiss is away at the African Cup of Nations.

Southampton: McCarthy, Walker-Peters , Valery (suspended), Broja, Smallbone, Livramento and Djenepo (African Cup of Nations) could all miss the trip to the Midlands. 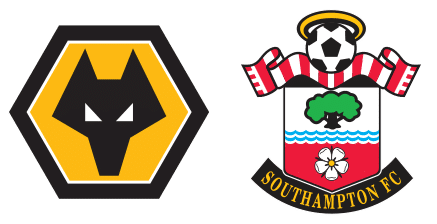