Wimbledon's recent form has them in a decent position to stay up. Oxford are in with a great shout of going up. Who will take another a big step to achieving their goal on Tuesday? Find out with our Wimbledon vs Oxford match preview with free tips, predictions and odds mentioned along the way.

When it comes to the over/under goals markets most predictions focus on the 2.5 cut off. Not this time. We're of the opinion that you should look to boost your odds by opting for over 3.5 goals for the Wimbledon vs Oxford game. The reason for this is because both sides are on three game runs that have boasted a ridiculous number of goals. Wimbledon's games have seen 14 goals for an average of 4.7 per match whilst Oxford's last trio have involved 16 goals – an average of 5.3.

Both sides know where the net is

The first of our tips indicated the volume of goals the recent fixtures for Wimbledon and Oxford have produced. Now we're going to point out that it's the two teams locking horns on Tuesday that have been responsible for the vast majority. The hosts have netted 12 goals in three with Oxford hitting 13. It would be a dramatic shift in form for the goals to dry up entirely. That becomes all the more true when you look at what are far from tight defences; Oxford have managed two clean sheets in 10 attempts and the Dons only fare slightly better with three.

Goals all round in both halves

Of our three tips this one backing both Wimbledon and Oxford to score in both halves is definitely the most high risk bet. It's got a really strong chance of coming in though purely based on the rate with which the teams are scoring goals. Wimbledon and Oxford have both scored in each half of their last three matches. When the sides last met, which was an EFL Trophy match in February, Oxford achieved the feat but Wimbledon only netted in one half – they have upped their goal scoring game since then though.

Pre-match stats for Wimbledon vs Oxford

Far apart in the league but not in form

20 points might separate these sides in the table but their recent form is almost identical. We wouldn't want to call the result of the game but goals should be going in from every angle based on their recent showings. Here's hoping! 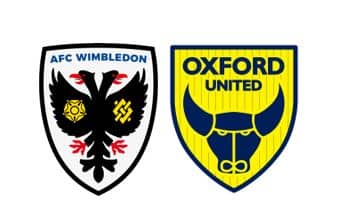