Brighton will finish in mid-table this season and West Ham have an outside chance of pipping Man Utd to 6th spot in the Premier League on the final day of the season. We're still expecting a close and competitive match between these two sides on the 22nd of May and could easily see the two clubs cancelling one another out.

Each of the last six Premier League meetings between Brighton and West Ham have ended in stalemates with the pair playing out a 1-1 draw at the London Stadium earlier in the campaign. Brighton drew with Leeds last time out while West Ham drew 2-2 with Man City, so you can see just why we're backing Sunday's clash to end all square as well.

Both teams have found the back of the net in each of the last six league meetings between these two clubs, and we're expecting more of the same from the pair this Sunday. Brighton have only failed to score in one of their last seven outings in the Premier League while both teams have scored in four of West Ham's last seven matches in all competitions, and we aren't backing either side to keep a clean sheet this weekend.

Brighton vs West Ham: the latest stats and odds

Will these two sides play out another stalemate this weekend?

Brighton started their game at Elland Road well, taking the lead through Welbeck in the 21st-minute after good work from Bissouma who claimed the assist. However, the Seagulls didn't do enough to see off their hosts and in stoppage-time it came back to bite them as Struijk equalised for Leeds.

West Ham will have been disappointed and yet relieved to have secured a point at home to Man City last time out. David Moyes' men found themselves 2-0 up at the break thanks to a brace from Bowen. However, Man City moved through the gears in the second half, pulling a goal back through Grealish and equalising via an own-goal from Coufal. Man City were awarded a spot-kick late on and Mahrez had the chance to win the game and effectively the title for City, only for veteran goalkeeper Fabianski to make a save and for the scoreline to end 2-2.

Brighton: Sarmiento, Mwepu and Moder are the main injury concerns for the hosts.

West Ham: Benrahma and Ogbonna could both miss the last game of the season through injury.

Q&A for Brighton vs West Ham 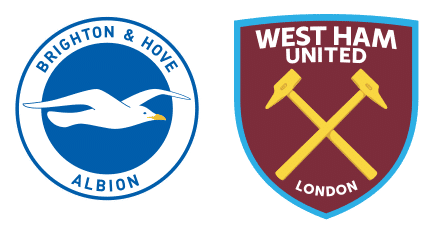