One of the more interesting matches of this La Liga round is the Valencia vs Sevilla duel, so check our detailed preview of this game to learn more about it.

Our free Valencia vs Sevilla betting picks and predictions

If you are struggling to decide what is the best bet for Valencia vs Sevilla, check our top betting tips for this game:

With five wins and a draw in the last six games, Sevilla has been in great form, just like they have been the entire season. Meanwhile, Valencia is hot and cold and completely unpredictable.

Since Sevilla is chasing Real Madrid in the title race, they will approach this game with ultimate focus. So, our prediction is for Sevilla to win this game, just like they did the last five h2h duels against Valencia.

Although we've seen more than two goals in just two of the last five head-to-head duels between Valencia and Sevilla, those two games happened in their last three meetings.

So, we could be seeing a start of a trend. Furthermore, Valencia averaged 3.20 goals per game in the league until now, which is the highest average in La Liga.

The best odds and latest stats for Valencia vs Sevilla

If you want to bet on top La Liga odds, including the best odds for Valencia vs Sevilla, check them out right here:

Team news, form, and probable lineups for Valencia vs Sevilla

While the guests are in a title race right now, the home team is also having a solid season. So, let's check both teams out in more detail:

With three wins, one draw, and two losses in the last six games, Valencia is in good rhythm at the moment. However, their last two games in the league were losses and they tend to play in series. Overall, Valencia is right in the middle of the standings with 28 points from 20 games they played so far.

Unfortunately, Valencia has more than a few uncertainties for this game since Correia, Cheryshev, Maxi Gomez, Wass, and Costa all tested positive for coronavirus recently. Also, Foulquer, Lato, and Gabriel Paulista will miss the game with injuries.

Although Sevilla enters this game after a tough loss to their city rivals in Copa del Rey, they have plenty of reasons to be optimistic since they are currently second in La Liga. Sevilla is only behind Real Madrid, by five points, but they also have one match less. So, if they can get a win against Valencia, they could come within two points of the first place.

En-Nesyri, El-Haddadi, and Bounou are with their national selections at AFCON, while Lamela, Navas, and Suso are injured at the moment. On the bright side, Jesus Corona could make his debut for Sevilla after arriving from Porto. 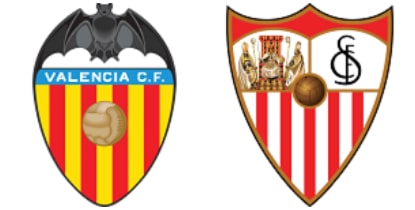