Just 3pts separate these two clubs in Serie A ahead of their clash at the Dacia Arena on Sunday. Udinese have a decent record against Sassuolo over the last few seasons but the visitors have form in their favour this weekend.

Here are our predictions for Udinese vs Sassuolo.

We're expecting these two sides to cancel one another out this weekend and for the game to end in a draw. Udinese haven't lost any of their last six league meetings with Sassuolo and have played out four draws in their last six matches heading into Sunday's clash. However, Sassuolo have avoided defeat in their last two away games and will be confident about their chances of coming away with a positive result this weekend.

The recent performances of both of these clubs point towards there being a very good chance that we will see both teams score on Sunday. Both teams have scored in five of Udinese's last six competitive and non-competitive matches and each of Sassuolo's last six outings in Serie A have also witnessed both teams score, so you can see just why we have predicted BTTS.

In terms of a final scoreline, we're going with a 1-1 draw. We've already mentioned the fact that both teams have scored in a majority of both club's recent fixtures and with under 2.5 goals being scored in five of the pair's last six head-to-heads in Serie A, a 1-1 draw looks like the most likely outcome on Sunday. Udinese's last three draws have all finished 1-1 and they all arrived in their last four league games.

Udinese's last game was away at the current Serie A champions Inter Milan where despite holding their hosts to a goalless draw at the interval, Udinese slipped to a narrow defeat. Correa scored twice in the space of 8 second-half minutes to ensure all 3pts went the way of the home side. Udinese had a bright start to the season but have slumped since then and now sit 14th in the table and are in danger of becoming one of the sides dragged into a relegation battle if they can't find their consistency.

Sassuolo entertained Empoli last time out and lead 1-0 at the break thanks to an own goal from the unfortunate Tonelli. Sassuolo thought they had done enough to win the game until Pinamonti equalised from the penalty spot in the 83rd-minute and were left stunned when Zurkowski scored a stoppage-time winning for the visitors. Consistency is the key for Sassuolo if they want to push further up the table because beating Juventus away and then losing at home to Empoli is only going to see you finish in mid-table obscurity.

Udinese: Ignacio Pussetto looks set to miss out on Sunday with a muscle injury but other than that, the hosts have a fully-fit squad to choose from.

Sassuolo: Filip Djuricic and Pedro Obiang are the main injury concerns for the visitors this weekend. 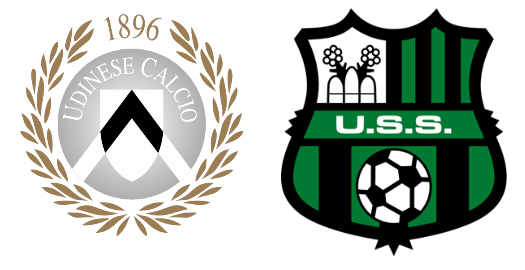