Udinese host Genoa at the Dacia Arena in Serie A on Sunday. Udinese are targeting their second home win on the bounce this weekend. Read our expert predictions and find the latest odds for the game below in our match preview.

Two of Serie A’s draw specialists face off on Sunday when Udinese meet Genoa. Find our top three predictions for the contest below.

Both Udinese and Genoa are languishing in the lower reaches of the Serie A table ahead of Sunday’s game the teams’ shared inability to turn draws into wins have scuppered their progress. Udinese have shared the spoils with their opponents in four of their last seven league matches, while six of Genoa’s last nine fixtures in the division have ended level. The sides tied 1-1 when they last did battle in March and another stalemate looks the likeliest outcome in their latest tussle.

We don’t expect a deluge of goals or goalmouth action when Udinese and Genoa meet at the Dacia Arena on Sunday and a stake on under 2.5 goals to be scored is advised with that in mind. Three of Udinese’ last four home games produced two or few goals, while three-quarters of Genoa’s last four matches failed to pass the over 2.5 goals line. In addition, both of last season’s meetings between these clubs spawned just three goals over 180 minutes, so stick to under 2.5 goals here.

Half With Most Goals: Second

Genoa have conceded a meaty 26 goals in 13 Serie A fixtures this season, though it’s worth noting that 17 of those efforts were shipped in the second half of their games. Andrii Shevchenko’s side seem to run out of gas in the latter exchanges of their matches and that could create an opportunity for bettors to back the second half to see more action than the first again this weekend.

Udinese vs Genoa preview: Season of struggle for both teams

Udinese snapped an eight-game winless run with a 3-2 triumph over Salernitana in their last runout at the Dacia Arena, though their reprieve was short-lived. I Bianconeri slipped to a 2-1 defeat at Torino in their latest test – a result that saw them drift south to within three places of the relegation zone in Serie A. Manager Luca Gotti will be determined to guide his team toward midtable safety as soon as possible, however.

Genoa were among the favourites to go down this season and their performances so far have done little to shake that tag as relegation contenders. Andrii Shevchenko’s troops haven’t won since their 3-2 victory at Cagliari back in September and they have gone ten games in Serie A without tasting success. Their overreliance on Mattia Destro to produce match-defining moments remains a major issue. 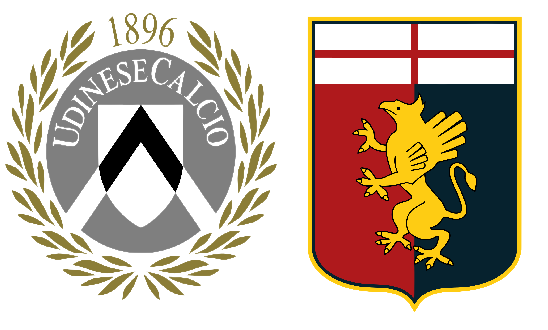 Sunday’s game is being played at the Dacia Arena.

Udinese have been priced as favourites to win by the bookmaker.