Tottenham vs Southampton: Our Top Predictions

Tottenham will be aiming to move above their local rivals, Arsenal, in the Premier League table for at least 24hrs with a win against Southampton on Wednesday. The Saints arrive having been taken to extra-time in the FA Cup by Coventry and will be looking to move into the top half of the table with a win of their own.

Son remains Tottenham's top scorer in the Premier League this season with 8-goals and we're backing the South Korean star to score against Southampton on Wednesday. Son is due a goal having failed to register in any of his last four appearances for the club but has scored 4-goals in his last 9 matches in all competitions.

All the stats and the latest odds for Tottenham vs Southampton

Tottenham made it through to the 5th Round of the FA Cup in relatively comfortable fashion, beating Brighton 3-1 at the Tottenham Hotspur Stadium. Kane put the home side in front after just 13-minutes and an own goal from March made it 2-0 in the 24th-minute. In the second half, Brighton pulled a goal back through Bissouma but just 3-minute slater Kaen restored the host's two-goal advantage.

Southampton went a goal down at home to Championship side Coventry in front of their own fans and tailed at the break. However, Armstrong equalised in the 63rd-minute and the game went into extra time. Substitute Walker-Peters made himself the hero by scoring what turned out to be the winner in the 112th-minute after good work from Broja. The Saints made it through to the next round but will have to put in a better performance if they want to take home any points from their trip to the capital on Wednesday.

Tottenham: Dier, Skipp and Tanganga are the main injury concerns for the hosts.

Southampton: Smallbone, McCarthy. Tella, Lyanco and Broja are injury concerns for the visitors but Djenepo should return to the squad. 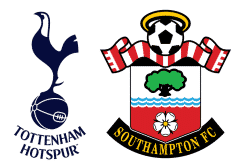