Man Utd will be looking for a response from their players following their 5-0 drubbing by Liverpool last time out. Tottenham have the home advantage and sit 1pt and one position ahead of the Red Devils in the Premier League table.

Here are our predictions for Tottenham vs Man Utd.

We've backed Saturday evening big game to end in a draw as Man Utd haven't lost on any of their last three trips to Tottenham and the pair have played to a very similar standard this season and we can see them cancelling one another out this weekend. Spurs have only won three of their last six matches and Man Utd have only managed two wins from their last six fixtures, so you can see why we're leaning towards a draw in this game.

Each of the last five competitive and non-competitive meetings between these two clubs have ended with both teams getting on the scoreboard, and we're expecting more of the same from the pair on Saturday. Four of Tottenham's and four of Man Utd's last six matches in all competitions have produced goals at both ends of the pitch, so you can see just why we're not backing either side to keep a clean sheet in this one.

We're confident that at least three goals will be scored when Tottenham host Man Utd this weekend as that has been the case in four of the pair's last five encounters in all competitions. Four of Tottenham's last six outings have witnessed at least three goals scored, while over 2.5 goals have been produced in four of Man Utd's last five fixtures.

Can Man Utd get their season back on track at the Tottenham Hotspur Stadium?

Tottenham went down 1-0 at West Ham last time out, thanks to a strike from Antonio in the 72nd-minute. Spurs have now lost and failed to score in their last two games and will be looking for a res[ponse from their players ahead of a big game against a Man Utd side that are struggling for confidence right now. Tottenham already sit a point above the Red Devils and could increase that gap with a morale-boosting victory this weekend.

Man Utd were torn to shreds in their own backyard by their arch enemy Liverpool last weekend and now Solskjaer needs to get a result against Tottenham to prove he hasn't lost the dressing room in what has been a poor run of form. The visitors have slipped down to 7th in the Premier League table and failure to win this weekend could see them drop out of the top 10 altogether. Both teams will be desperate to win on Saturday and the first goal of the game could prove huge in deciding which way this game is going to go.

Tottenham: Matt Doherty and Ryan Sessegnon are the only injury concerns for Spurs this weekend.

Man Utd: Paul Pogba is suspended, while Raphael Varane and Anthony Martial hope to return from injury in time to make the trip to London. 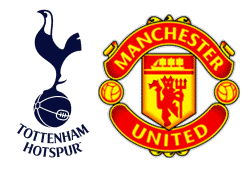