Torino sit three places and 3pts ahead of their guests Sassuolo in the Serie A table and have won their last two matches, while the visitors secured a massive 5-1 win at Empoli in their last away game in the league.

There is a very good chance that we will be treated to goals at both ends of the pitch when Torino host Sassuolo as that has been the outcome in six of the pair's last seven meetings in Serie A. Both teams scored in Torino's last game away at Sampdoria, while four of Sassuolo's last six fixtures have ended with both teams getting on the scoreboard.

Torino are unbeaten in their last three meetings with Sassuolo and have won four of the duo's last six head-to-heads in Serie A. The hosts have looked good at home of late, winning five of their last six at the Stadio Olimpico Grande Torino. Sassuolo haven't been bad on the road of late but we expect Torino to do just enough to win this game.

Torino looking to secure the domestic double over Sassuolo this weekend

Torino were away at Sampdoria in their last Serie A game and went behind in the 18th-minute. However, Singo equalised for the visitors in the 27th-minute and the team went in level at the interval. Just one goal was produced in the second half and it went the way of Torino and their on-loan midfielder Praet. That win puts Torino in the top half of the table and another victory this weekend could see the club close the gap on the likes of Fiorentina, Roma and Lazio.

Sassuolo were drawn at home in the latest round of the Coppa Italia where they faced struggling Cagliari. A solitary goal in the first half from Harroui proved enough for Sassuolo to progress into the next stage of the competition. Sassuolo's league form hasn't been all that impressive this season but a win on Sunday could move them into the top ten.

Torino: Fares, Aina and Belotti are the only injury concerns for the home side.

Sassuolo: Henrique, Traorè, Djuricic, Obiang and Romagna look set to miss out this weekend for the visitors. 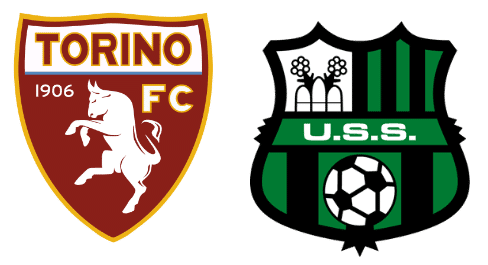