Cagliari might sit in the relegation zone in Serie A right now but their recent performances in the league as along with their recent history against Torino suggest that the visitors could get something out of this game. Torino head into the game on the back of a morale-boosting draw against local-rivals Juve but should be exp[ecting another tough game this weekend.

There is a very good chance that we will be treated to goals at both ends of the pitch on Sunday as that has been the case in five of the last six league meetings between these two clubs. Four of Torino's and four of Cagliari's last five matches in all competitions have ended with both teams getting on the scoreboard, so you can see just why we're not confident in either sides' ability to keep a clean sheet on Sunday.

Last Friday, Torino made the very short trip to Juventus and fell behind in the 13th-minute to a goal from Juve defender de Ligt. Despite Juve controlling the game for the most part, Torino stayed in the match by avoiding conceding another goal and then, shortly after the hour mark, Torino hero Belotti had a chance and took it to make the scoreline 1-1. Torino managed to hold out for a draw much to the satisfaction of their supporters who don't often get to celebrate against their arch-rivals.

Cagliari weren't expected to take anything from their home game against high-flying Napoli on Monday night. The first half ended goalless but the home fans were celebrating in the 58th-minute when Pereiro forced the ball home to make it 1-0 to Cagliari. The hosts tried their very best to see the victory out but just couldn't keep Napoli at bay and Osimhen equalised with just 3-minutes of the 90 remaining.

Torino: Praet and Fares have both been ruled out of this weekend's clash through injury.

Cagliari: Ceter, Strootman, Walukiewicz and Rog could all miss the trip to Turin due to injury. 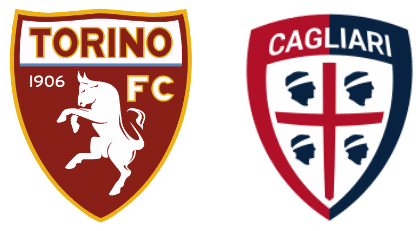