The New Saints to win

Linfield vs The New Saints: Our top betting tips

The New Saints are in better form and won the first leg. Does that make them bankers to win here? Find out with our Linfield vs The New Saints match preview with free tips, predictions and odds mentioned along the way.

The New Saints will win

The New Saints have enjoyed some fine form lately; they've lost just once in their last 13 games in all competitions. In fact, The New Saints won 10 of their last 11 games. Linfield, on the other hand, have not enjoyed the same form; they've won just one of their last four games, with a draw and two losses. It's worth noting that one of those losses came against The New Saints in the reverse fixture of this tie; considering both teams' recent form, we are predicting a win for the visitors.

The New Saints have scored goals consistently over the past few months; they found the back of the net in 12 of their last 13 games. In fact, The New Saints scored 40 goals in that 13 game stretch, with over three goals scored per game. Conversely, TNS have not been able to keep the goals out; they have seen their defence breached in seven of their last eight games. In the same vein, Linfield have scored their fair share of goals; they averaged 1.5 goals per game in their last 15 games. Considering both teams scored in six of The New Saints' last eight games, both teams will like

Will The New Saints finish the job with another win here?

The first leg of this tie might have ended just 1-0 but there was far more goalmouth action than that scoreline would suggest meaning this second leg encounter has the potential to be a very good game with things still in the balance. The New Saints will be confident of extending their lead after a decent first leg display but Linfield will look to home advantage to get them back into things.

Linfield have not enjoyed their best run of form in recent weeks; although they are coming off a win, that was their first win in four games. It's worth noting that Linfield lost the reverse fixture of this tie by a lone goal; they'll hope to overturn that deficit as an in-form The New Saints come visiting.

The New Saints have been on fire recently; they have 10 wins in their last 11 games, across all competitions. The New Saints will pay a visit to Windsor Park on Wednesday, having won the reverse fixture of this contest; they'll fancy their chances against a struggling Linfield side.

A quickfire FAQ on Linfield vs The New Saints 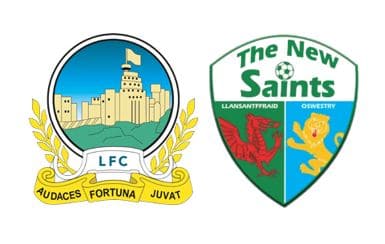