Group E is so finely poised that any of the four teams could still qualify for the knockout stage of Euro 2020. Sweden top the group and only need a point from this game to secure their spot in the next round, while only a win will do for Poland.

Read on for our full match preview and prediction for Sweden vs Poland in the European Championship.

Sweden have proven to be a very tough team to break down and one that doesn't create many goalscoring opportunities as well, so you can see why we're backing under 2.5 goals to be scored in their game against Poland. Sweden are yet to concede at the Euros, securing a 0-0 draw against Spain and beating Slovakia 1-0, and four of their last five matches in all competitions have produced fewer than three goals.

Poland have drawn three of their last four matches in all competitions and we believe their game against Sweden is most likely to end all square as the Scandinavians are very strong defensively. Poland also haven't won against Sweden in any of the pair's last seven encounters and Lewandowski and co have only managed to win one of their last six fixtures.

Poland haven't failed to score in any of their last six international matches, which includes both of their other Group E games against Spain and Slovakia. Sweden might have a solid defence but Poland will be going all out for the win, so we can see the Scandivaians conceding their first goal of the tournament in this game. Three of Poland's last four matches have ended in score draws, two of which have ended 1-1.

Sweden vs Poland: The Latest Stats, Markets and Odds

The Master Takes on the Apprentice

Robert Lewandowski. 32, is arguably the best out and out centre-forward in world football today. The Polish captain score almost a goal a game for Bayern Munich and the past two seasons, he has ended the campaign with more goals than games played. For his national team, Lewandowski has netted 67 goals in 121 caps and is up and running in Euro 2020 after scoring the equaliser against Spain.

Alexander Isak is one of the hottest prospects in European football and has put in some impressive displays for Sweden at Euro 2020. There is talk of a possible move to Liverpool this summer following his 17-goals in 34 league games for Real Sociedad this season. The 6'4″ forward has pace and great dribbling ability and could make his mark on Euro 2020 by scoring the winning goal against Poland.

Sweden are in a great position to secure qualification to the knockout stage and perhaps even top Group E. After their 0-0 draw with Spain, the Swedes secured a 1-0 win over Slovakia, taking them to the top of the group a point ahead of Slovakia. Sweden have built their success on their solid defence and rigid 4-4-2 formation which Spain and Slovakia both failed to penetrate. Poland will be going for the win but we doubt that will worry Sweden as they like to play without the ball, catching their opponents on the counter-attack.

Poland were unlucky to lose their opening game but managed to salvage a draw against Spain to keep themselves in the competition. Lewandowski scored in that game and now that he is off the mark, Poland will be hoping to use that momentum in their must-win game against Sweden. Krychowiak returns to the Poland squad following his one-match ban and he will offer plenty of experience in the heart of their midfield. This is a game Poland simply have to win but Sweden will be happy with a draw and that is just what we expect them to get. 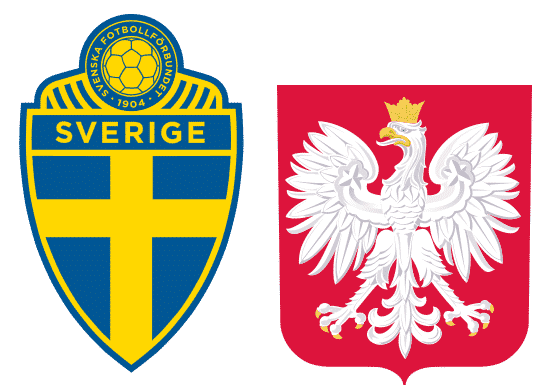