Top free betting tips and odds for Stuttgart vs Dortmund

Stuttgart are looking to extend their unbeaten streak of league games when they host Dortmund next on Friday, 8 April.  The BVB have lost five points in the last two league games, increasing their trial from the first position.

Stuttgart has made turns of draws and wins in Bundesliga recently, followed by a series of winless games. While on the other side, Dortmund lost their first game of the last eight attempts previously, winning three of them. The Balck and Yellows are also unbeaten in the recent six away outings. Back to the teams’ H2Hs, the BVB took over the Reds four times in the last five meetings. So the next visitors don’t seem an easy challenge for the hosts and the Swabians are likely to lose three points in this game.

All of the last four H2Hs of Stuttgart and Dortmund displayed both teams on the scoring sides, and the BVB held an incredible sequence of scoring against the Reds by scoring in almost all of the meetings. In the recent games, Stuttgart couldn’t get consistent results but they have scored in all their last ten attempts. The same is true for Dortmund who didn’t miss the goals in any of their recent games. Given the teams’ latest numbers, it is most likely to witness a BTTS outcome at the end of this game.

Stuttgart vs Dortmund: Check out the best odds and the latest stats

Stuttgart vs Dortmund: Check out the team lineups

The Swabians couldn’t manage to hold the lead but restricted Arminia Bielefeld to a 1-1 draw to take one point. The team is unbeaten in the last four league outings, however, they are just one point above the relegation battle, standing at fifteenth place. eight players of the team will be on the injury list while Waldemar Anton will be on suspension for this game.

Following the team’s inconsistency in recent matches, the difference from the table leaders has reached 11 points. The Black and yellows won only two of the last five attempts, along with two draws and one defeat. Dortmund will play without six players of the squad who are injured ahead of this game.

Questions About Stuttgart vs Dortmund 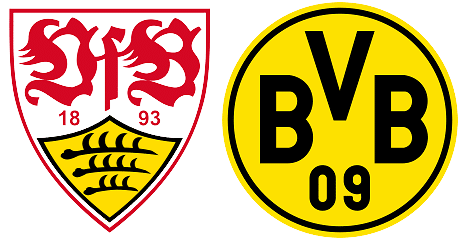 Where is the game being televised? Arena 4 , beIN Sport (Fra) and DAZN German.