Sparta Rotterdam are up against Groningen looking to continue their good run of results against this team. This preview focuses on the league meeting between the two clubs at Sparta-Stadion Het Kasteel on September 17, 2022.

Sparta Rotterdam’s difficult start to the season continues with the team losing 3-0 to Feyenoord in the recent league match. Groningen picked up a first victory in three games after a narrow 1-0 success over Cambuur.

Even though Groningen have picked up a victory in the recent game, they are likely to struggle against Sparta Rotterdam. All of the three league defeats suffered by Sparta Rotterdam have come up against top teams and they have done relatively well against teams around them in the table.

Groningen have not scored in just one of the last five games. They take on a Sparta Rotterdam team who have kept a clean sheet against all of the opponents outside the top five from last season. They, however, have not been solid enough to be convincing for a clean sheet in this game.

Sparta Rotterdam vs Groningen: Battle in the Dutch Eredivisie

Sparta Rotterdam were able to pick up a victory over Groningen in the recent meeting and they have actually done well in many of the matches against Groningen. In the last three games against this opponent, Rotterdam have not suffered a defeat. The lack of any major injury problems as a big boost for Sparta Rotterdam, who may go in for some changes to the starting line-up to freshen things. Rotterdam have generally lost big time in many of the league matches when they have come up against the top opposition.

Groningen were delighted to have picked up a victory against Cambuur. It is a huge positive for the team to have picked up yet another narrow victory and a clean sheet. As a result, Groningen have now jumped to 9th place in the table with only one point away from getting into the top six. The match could see a couple of changes from Frank Wormuth. Even though this may disrupt the winning combination, Groningen know that they can certainly perform much better than they have done in recent weeks.

Sparta Rotterdam: Tim Coremans and Tobias Lauritsen are out of action for the game.

Groningen: Groningen will be without Jan Hoekstra and Nordin Musampa due to injury problems.

Top Dutch Eredivisie Stats ahead of Sparta Rotterdam vs Groningen

Questions about Sparta Rotterdam vs Groningen 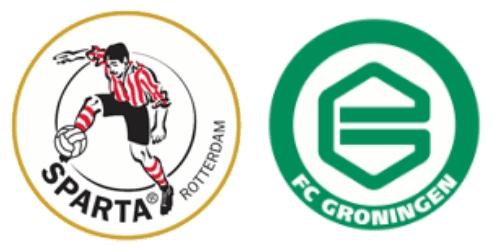 Where is the match scheduled? Sparta-Stadion Het Kasteel

Which team is the favourite to win? Sparta Rotterdam