Both Shrewsbury and Wigan are sitting in the bottom half of the table, with Wigan still in danger of relegation. Read our preview of this match to learn more about these two teams and to get a few betting tips along the way.

Top betting predictions and tips for Shrewsbury vs Wigan

If you are looking for League One betting tips in general or you want to get some free betting predictions for Shrewsbury vs Wigan, we've got you covered:

Odds are subject to change, so check the odds with your bookie before placing a bet. Our recommended bookmaker for this game is Ladbrokes.

The two teams are pretty evenly matched, which is evident in the odds as well. And while Shrewsbury is a slight favourite, we expect to see a win by Wigan in this game. First of all, Shrewsbury is safe from relegation so they won't have the same urgency in their game as Wigan who is fighting for survival. Secondly, Wigan is in better form since they have won three games in a row. So, our prediction is for Wigan to win this game.

The recent head-to-head history between Wigan and Shrewsbury doesn't really support our prediction since four of their last five duels have gone under 2.5 total goals. Furthermore, three of them have even gone under 1.5 total goals. Still, traditions are meant to be broken and we feel that now is the perfect time since Shrewsbury has gone over 2.5 total goals in two of their three home match, while Wigan has done the same in away games.

Although we haven't seen many goals in previous h2h duels between these teams, both of them have scored in two of their last five meetings. Shrewsbury is scoring 1.32 goals per match at home, and they concede just as many goals. Meanwhile, Wigan scores 1.19 goals per game in away matches, and concedes 1.48 goals per game. So, both teams to score sounds like a reasonable prediction.

Top odds and helpful stats for Shrewsbury vs Wigan

You can find the best odds and stats right here if you don't want to spend a lot of time looking at different websites:

Shrewsbury vs Wigan preview: A crucial game for Wigan

The home team is safe from relegation, with 10 points ahead of the relegation zone and four games to play. This perhaps led to some complacency in recent matches since Shrewsbury has lost four of their last six games in League One. Of course, most of those losses came from teams higher in the standings, but the trend is not promising for The Shrews. The good news are that the team has a rather clean bill of health, with only Pierre and Daniels questionable for this match.

Unlike their upcoming rivals, Wigan is still fighting for survival since they are only four points ahead of Northampton, the first team in the relegation zone. Rochdale is also there with five points fewer than Wigan but with one game behind. The Tics are in good form, however, with three wins in a row. So, they seem to be heading in the right direction and a win in this game would give them a piece of mind. However, they also have a few injury problems, with Merrie, Wootton, Massey, Pearce, Joseph, and McHugh under question right now.

FAQ for Shrewsbury vs Wigan 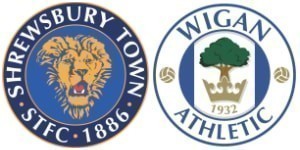