With the season agonisingly close to its end Lincoln will be desperate to clinch the playoff spot they've fought so hard to sit in currently. Victory over Shrewsbury will help with that. Will they get it though? Find out with our Shrewsbury vs Lincoln match preview with free tips, predictions and odds mentioned along the way.

Shrewsbury might have beaten another playoff hopeful, Blackpool, in their last match but we're still backing Lincoln to win this one. Lincoln need a few more points to ensure their playoff hopes don't end up relying on others falling over and they'll be confident coming into this match given they've won their last two away games. They lost on Saturday but a narrow defeat to Hull is no disgrace and they had been unbeaten in four prior to that knock back. Shrewsbury hadn't won in four before their win and their home form is pretty abject too; they've won one of seven.

Shrewsbury to score in defeat

The first of our tips has Lincoln to win but we don't think they'll have it all their own way on Tuesday night. Shrewsbury's home form has been poor but they've only failed to score in three of their past 10 fixtures on their home turf. They've also only recorded one clean sheet, which will be music to Lincoln ears as they've scored in all bar one of their previous 10 on the road. Their defensive record is the best in the league in respect of away form but that's over the entire season; their more recent games has seen them concede in seven of the last 10. The sides have also met at Montgomery Waters twice this season – once in the cup – and both games have seen goals on either side.

Lincoln to concede just the one

With our tips to this point indicating Shrewsbury will score and yet lose the game the only thing left to decide is where their total goals will end up. Our prediction is that they'll end the game with just the solitary strike. Why? Well, it's a number they've finished on in six of their past 10 matches and three times in their past five at home. Then their is the Lincoln aspect; in their five latest away games they've conceded a single goal on three occasions. Finally, the last three times these sides have met Shrewsbury have scored…that's right…one goal.

Shrewsbury's season might be petering out but Lincoln's is alive and kicking. They look good value for the playoffs but there are two key things to consider where that is concerned. The first is that it's not a done deal yet whilst the other is that they'll want to arrive in them in good form. A win over Shrewsbury will help on both counts.

Shrewsbury vs Lincoln: A quick wrap up 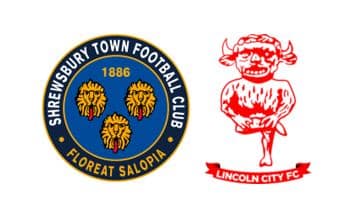