Perhaps the most interesting match in the upcoming round of La Liga is the Levante vs Sevilla, with both teams needing the points badly. So, check our preview of this game to learn more about it and to get some free betting tips along the way.

The best Levante vs Sevilla betting picks and predictions

If you are not sure what is the right bet for Levante vs Sevilla, check our top betting tips for this game right here:

If betting on an outsider was ever worth the risk, it's probably in this game. After winning two of their last three games, Levante is suddenly in a position to hope for survivial, but they need to keep winning.

Meanwhile, Sevilla enters this game after a tough loss to Real Madrid at home after leading at half time. They also need points since they are fighting for a top four finish and a place in the Champions League. However, Sevilla has just one win in the last six games and we can see Levante beating them at home as they try to crawl out of the relegation zone.

Although we've seen three or more goals in just two of the last five h2h meetings between Levante and Sevilla, we saw eight goals in their duel in the first half of this season.

With that in mind, we expect this game to go over 2.5 total goals, despite the fact that Sevilla averaged just 2.22 goals per game in the league this season. After all, Levante averaged a whopping 3.16 goals in La Liga so far, which is the highest average in the league.

The top odds and important stats for Levante vs Sevilla

If you are trying to find the best Levante vs Sevilla odds, you can check them all out right here on our website:

Both teams are looking for a win in this game and that guarantees some fun football. Let's check them both out in more detail now:

With two wins in the last three games, Levante can now hope to avoid relegation even though they looked to be in a desperate position a few weeks ago. They are still in the relegation zone, they are still four points behind the first team outside of the zone, but with six games left in the league, at least now they have a fighting chance.

Meanwhile, the team is without Jorge de Frutos, Carlos Clerc, Martin Caceres, and Shkodran Mustafi, who are all injured. Also, Roger Marti is questionable.

Last weekend was a disappointing one for Sevilla since the team had a 2-0 lead at half time against Real Madrid at home, but they ended up losing the game after conceding three goals in the second half. The team now has just one win in the last six games and they are in danger of dropping down below the fourth place and losing out on a place in the Champions League for next season.

Once again, Sevilla will be without Fernando, Suso, and Karim Rekik, who are all injured, while Martial will probably miss the game as well after picking up a knock over the weekend.

The most frequent questions for Levante vs Sevilla 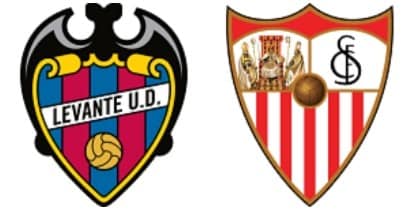