Bologna will be hoping for a similar performance to the one they put in against Sassuolo in the pair's reverse fixture in Serie A, a 3-0 victory, when the two sides lock horns at the Stadio Renato Dall'Ara on Sunday 15th May.

We're expecting goals in this game at both ends of the pitch as five of the duo's last seven meetings in Serie A have ended with over 2.5 goals being scored and both teams finding the back of the net. Three of Bologna's last four fixtures have witnessed at least three goals scored and have seen both teams score, including their 4-3 defeat at Venezia last time out. Four of Sassuolo's last six matches have also seen both teams fail to keep a clean sheet and have produced over 2.5 goals, including a heavy 6-1 defeat at Napoli.

Austrian striker, Marko Arnautovic, top scores for Bologna in Serie A this season with 14-goals, only two of which have come from the penalty spot. The former Stoke City forward heads into this weekend's clash in great form, netting 5-goals in his last five league games, so you can see just why we're backing Arnautovic to score against Sassuolo this weekend.

Everything you need to know about Bologna vs Sassuolo

Bologna searching for the domestic double over Sassuolo

Bologna would have fancied getting something out of their recent trip to struggling Venezia but the home side put in one of their best displays of the season to secure all 3pts. The game itself was jam-packed with goalmouth action, producing 7-goals in total. Bologna fell two goals behind inside the opening 20-minutes but fought back well to take a 3-2 lead in the 68th-minute thanks to goals from Orsolini, Arnautovic and Schouten. However, a 78th-minute penalty put the hosts back onto level terms and a stoppage-time goal handed Venezia a much-needed victory.

Sassuolo would have been expecting a tricky home game against fellow mid-table side, Udinese. Scamacca got the game off to the best possible start for the hosts with a goal in the 6th-minute. However, Sassuolo failed to add to their tally and in the 77th-minute Udinese equalised and the game ended all square. Just 4pts divide Sassuolo and Bologna heading into Sunday's clash but with two games left to play, a draw would be good enough to see the home side finish above their guests.

Bologna: Mitchell Dijks is the main injury concern for the home side this weekend.

Sassuolo: Jeremy Toljan and Abdou Harroui could both miss the trip to Bologna through injury. 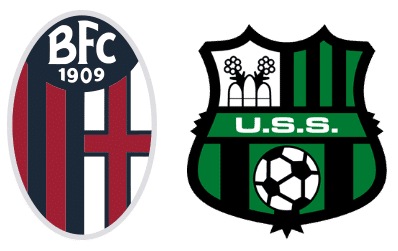