Saint-Etienne locks horns with Lille in the third round of the new season. Both teams are yet to record a win in this season after two games. Find out how we are tipping these teams to fare against each other in this match preview.

Our Best Three Picks for Saint-Etienne vs Lille

Soccer predictions at Football Whispers are bias-free and based on in-depth analysis of available team data, news and stats. The following are our best three picks for Saint-Etienne vs Lille:

Note: Odds for this game are correct on NetBet at the time of writing our match preview. Please visit the bookmaker for updated prices.

Etienne to draw or win

We are also tipping lots of goals in this fixture. Both teams have defensive worries coming to this game. While it is hard to predict an outright winner on matchday given that these teams drew in the last meetings and that it is still early in the season, more than two goals look like a plausible outcome on matchday.

Match Preview: Saint-Etienne Looking for First Victory over Lille since May 2018

Since Etienne bagged a 5-nil victory over Lille on 19th May 2018, the hosts have gone without another win in the last five encounters with Lille. Within that duration, Lille has recorded 3W over Saint-Etienne. The other two matches ended in a draw, all of which are last season’s fixtures. Saint-Etienne finished 11th last season and hope to do even better this season. Claude Puel is still the man in charge and despite averaging a paltry 1.25 points after 73 games, Saint-Etienne has started the season on a pretty impressive note of 2D, scoring thrice and leaking three goals.

On the other hand, Lille’s season under new manager, Jocelyn Gourvennec, is not what many expected of the defending Ligue 1 champions. Lille has 1D of 3-3 and a massive loss of 4-0 in the first two games. After a 1-nil victory over PSG in the Champions Trophy at the onset of a new season, Jocelyn Gourvennec’s tactics don’t seem to work anymore. The French tactician who has 4 and 3L in seven meetings with Claude Puel faces another tough test in his fourth game at the helm. 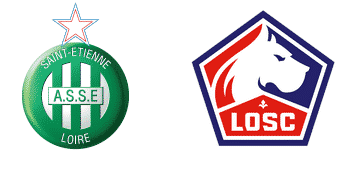 How do these teams compare in previous meetings?

There have been 18 meetings between these teams and the hosts have 5W while Lille has 7W. The remaining five games ended in a draw.