The first game to be played in the mid-week round of La Liga is the replay of Copa del Rey final. So, if you want to learn more about the Valencia vs Real Betis duel, check our top betting tips for this match.

Our best Valencia vs Real Betis betting predictions and tips

If you are not sure what is the right bet for Valencia vs Real Betis, check our top betting picks for this duel:

After beating Valencia in Copa del Rey final, the Bats will certainly be hoping for revenge in this game, even though they don't really have a competitive motive.

But Real Betis does since they are fighting for a Top Four finish and after a loss to Barcelona, this is a must-win game for them. With that in mind, we can see the guests taking all three points, especially since they are clearly the better team and in better form.

Both teams have scored in four of the last five head-to-head duels between Valencia and Real Betis, so we expect to see the same thing on Tuesday in their next game.

After all, both teams scored in 66% of all Valencia matches in the league this season, while the same is true for 51% of all Real Betis games in La Liga until now.

The best odds and key figures for Valencia vs Real Betis

If you want to place a bet on the top Valencia vs Real Betis odds, check our selection of odds from a few different bookies in the UK:

The two teams will meet once again after that exciting Copa del Rey final, so let's take a closer look at both teams ahead of this game:

The Bats didn't have a lot of success in recent years, to put it mildly. And given the fact that they reached Copa del Rey final this season, the fans can certainly be happy, although they are probably disappointed by the fact that they failed to win the trophy. In any case, Valencia is currently right in the middle of the standings, but they are in poor form since they are without a win in the last six games in La Liga.

Meanwhile, the team will be without Jose Gaya and Guillamon since both of them will have to serve suspensions in this game. Also, Gabriel Paulista is out with an injury, while Hugo Duro and Marcos Andre are questionable.

After winning Copa del Rey and doing well in Europa League this season, Real Betis can certainly be happy with how things went for them so far. But a cherry on top would be reaching the fourth place in La Liga and securing a place in the Champions League for next season, which doesn't seem very likely, but it is possible. However, Real Betis is without a win in the last four games in the league, so this next game against Valencia is a must-win for them.

Los Verdiblancos will be without Martin Montoya, Victor Camarasa, and Rui Bravo through injuries, while Hector Bellerin is also more likely to miss the game than to suit up.

The most common questions for Valencia vs Real Betis 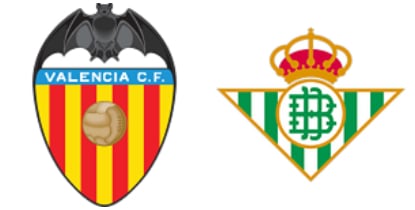