Both of these teams arrive here with a good track record of avoiding defeats in recent times. Will we see a victor here? Find out with our Pyunik vs F91 Dudelange match preview with free tips, predictions and odds mentioned along the way.

F91 Dudelange are coming off back-to-back wins against KF Tirana; they've been unstoppable in recent weeks, with seven wins in their last eight matches. However, Dudelange will be going up against a Pyunik side that did not lose any of their last 21 games; Pyunik won 14 of those games, with seven draws. It's important to note that Pyunik Yerevan have drawn a lot of games recently; as four of their last five games were level at the end of regulation time. These are two teams that don't lose often; and considering Pyunik's last three games were level at the end of regulation time, this match will likely end in a draw.

Although Pyunik have not exactly been a very high-scoring team, they've consistently scored goals over the past few months; as a matter of fact, Pyunik found the back of the net in 30 of their last 31 games. In these same vein, Dudelange have scored a lot of goals recently; they scored in all of their last 22 games across all competitions. It's fair to point out that both teams have conceded their fair share of goals recently; Pyunik have seen their defence breached in six of their last nine games, while Dudelange conceded four times in their last three games. Considering both teams scored in six of Pyunik's last nine games, we should expect goals at both ends.

The Champions League qualifiers are heating up

These sides are edging towards the Champions League proper now but there are still some big games that are ahead; this is stage one of the remaining challenges. Both arrive in strong form meaning they will be confident of putting down a positive marker here.

Pyunik Yerevan have been a difficult team to beat; they have no losses in their last 21 games in all competitions, with 14 wins and seven draws. Pyunik knocked out CFR Cluj in the previous round on penalties; they'll be eyeing a place in the third qualifying as Dudelange come visiting.

Dudelange impressed in the previous round against KF Tirana; despite being the underdogs, they won both legs of that tie. Dudelange have won seven of their last eight matches across all competitions; it'll be interesting to see how they'll fare against an in-form Pyunik side.

A quickfire FAQ on Pyunik vs F91 Dudelange 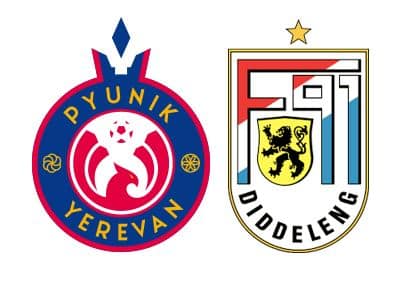