PSV were able to get a hard-earned draw against Rangers in the first leg. This will be a preview of the second leg which takes place at Philips Stadion on August 24, 2022.

PSV produced a late goal to pick up a draw against Rangers in the first leg. The manner of conceding a late goal is a blow for Rangers and their recent confidence.

PSV were delighted to not allow Rangers to pick up a sizable advantage in the first leg. The draw from the first leg at Ibrox Stadium would be one of the difficult tasks for PSV in recent meetings, but they have come out in flying colours. Now, PSV should be able to make use of home advantage and pick up a slender advantage to progress into the group stages.

Rangers and PSV are two teams who have a lot of attacking potential. The two teams have produced over 2.5 goals in the last four games each. Rangers have been able to get excellent performances out of players like Lawrence, who has scored in three consecutive games.

PSV vs Rangers: Battle for the Champions League group stages

PSV were able to come away from the intimidating atmosphere at the Ibrox Stadium with a manageable result. This gives them a sizeable advantage on home turf, where they have been picking up an excellent set of results of late. PSV are looking to reach the Champions League group stages after an absence of four years.

Rangers are likely to be dejected after failing to make the most of home advantage in the first leg. Now, the Scottish outfit are not just up against a very strong PSV outfit, but they also know that the Dutch team have had a full week to prepare for this encounter.

PSV: Carlos Vinicius, Mauro Junior, Yorbe Vertessen, Olivier Boscagli, and Noni Madueke are unavailable because of injuries. Defender Armando Obispo has picked up a suspension, while Ricard Ledezma is rated as a big doubt for manager Ruud van Nistelrooy.

Rangers: Scottish outfit Rangers will be without Ianis Hagi and Nnamdi Ofoborh because of injuries. The club are waiting to see if Tom Lawrence and Kemar Roofe will be available for the game, while Conor Goldson has picked up a suspension.

Top Champions League Stats ahead of PSV vs Rangers

Questions about PSV vs Rangers 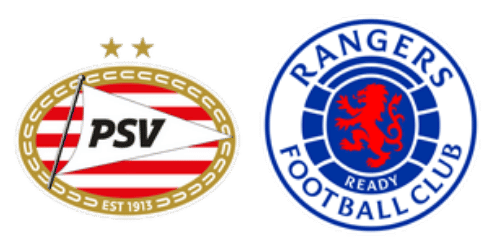 Where is the match scheduled? Philips Stadion