Direct free-kicks are an art; one that needs to be honed with years of patience and practice. And yet, in truth, it's an ability that is still not fully appreciated in the modern game.

People write it off as a luxury as opposed to a necessity but players who can threaten from dead-ball situations on a regular basis are proof there's value in having a specialist.

Placing the ball into the top corner from 30-yards isn't down to luck. Some of the best players in  Premier League history built their reputation on being able to bend the ball past a goalkeeper. Just ask David Beckham.

There's something special about watching a player lift a free-kick over a wall and beyond a keeper who is left grasping at thin air.

Seb Larsson, Dimitri Payet, Steven Gerrard, Robin van Persie, Cristiano Ronaldo and Philippe Coutinho all wowed fans with goals of such ilk. Their set-piece ability isn't what made them the players they were, or are, but it supplemented their other traits.

With this in mind, we've taken a look at the deadliest free-kick takers in the Premier League since the start of the 2016/17 season. To do so we've analysed the players who have taken 15 or more free-kick shots and worked out their conversion rates.

One of the caveats is for players to be taken into account they have to be plying their trade in the Premier League, so that rules out Coutinho and Payet.

There are ten players on the list, but they're not necessarily ones you'd expect to see mentioned.

The Brazilian centre-back went from being a key player in Chelsea‘s Premier League winning side to nothing more than a squad player after a falling out with Antonio Conte.

Starts in the first team have been scarce since he questioned the manager's tactics after a Champions League defeat to Roma but that doesn't detract from his free-kick ability.

He scored a memorable goal against Liverpool last season when he caught out Simon Mignolet with some quick thinking in a monumental battle at Anfield.

However, he's converted just 4.76 per cent of his free-kick attempts.

The West Ham United maestro has put on a show for fans at the London stadium since his arrival in 2015.

He's not as deadly as Payet from distance but he has scored one goal direct from a free-kick – giving him a 5.56 per cent conversion rate. It came against Leicester City and it was perfectly guided over the ball and into the top corner.

Foxes keeper Kasper Schmeichel was rooted to the spot and Hammers supporters will hope Lanzini can repeat the trick in the coming weeks as they battle against relegation.

The want-away Leicester attacker is highly skilled in several areas, including when it comes to striking shots from distance.

His technical ability from dead ball situations is one of the reasons Manchester City reportedly bid £65million to bring him to the Etihad during the winter window.

He's scored one of his 14 free-kick attempts. It came against Bournemouth earlier this month when he curled the ball around the wall and past Asmir Begovic. The Leicester No.26 has a 7.14 per cent conversion rate.

Ward-Prowse is a set piece specialist. His corner kicks cause havoc in the penalty area and he's always a threat when lining up a free-kick.

Like Mahrez, the Southampton midfielder has a 7.14 per cent conversion rate. His one free-kick goal was against West Bromwich Albion. It was a whipped effort beyond Ben Foster.

He was a creative whirlwind on the ball and he managed to find the back of the net with high frequency. He's scored two of his last 26 free-kick efforts. Both were vital. 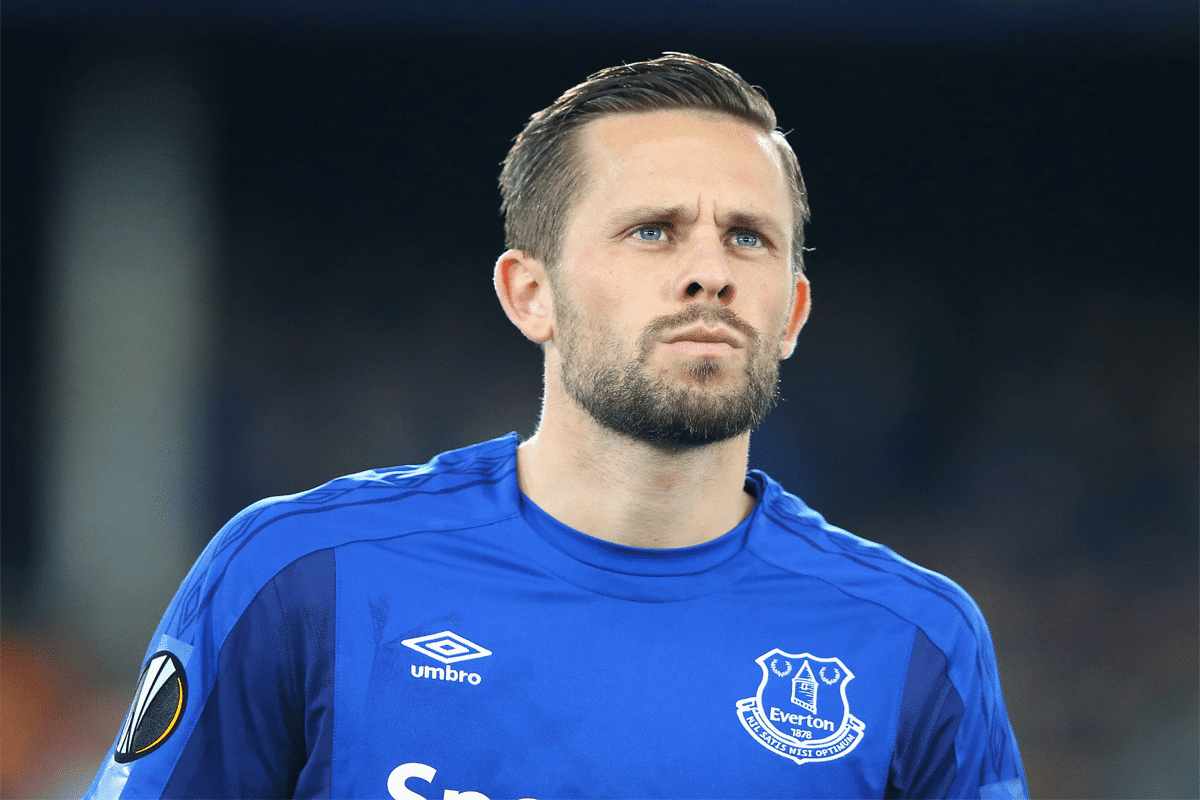 He grabbed the equaliser at Old Trafford and his goal against Crystal Palace got the Swans back into the game in what was a relegation six-pointer.

He hasn't yet scored from a free-kick for Everton and given he could be ruled out until next season, Toffees fans may have to wait a while yet to witness a Sigurðsson special first hand.

The Manchester United No.7 has converted 7.69 per cent of his free-kicks over the past two seasons.

He's yet to manage one for the Red Devils but Arsenal benefitted from his ability from dead ball situations.

Interestingly, though, both goals arrived early on in the 2016/17 season. The Chilean needs to step up his game before he drops down the list.

The Belgian is arguably the best midfielder in Europe but when it comes to converting free-kicks he's only second on our list.

In his last 27 attempts for Pep Guardiola's side he's managed to score three, which gives him a conversion rate of 11.11 per cent.

He's way clear of Sánchez but he's nowhere near the man topping the charts. 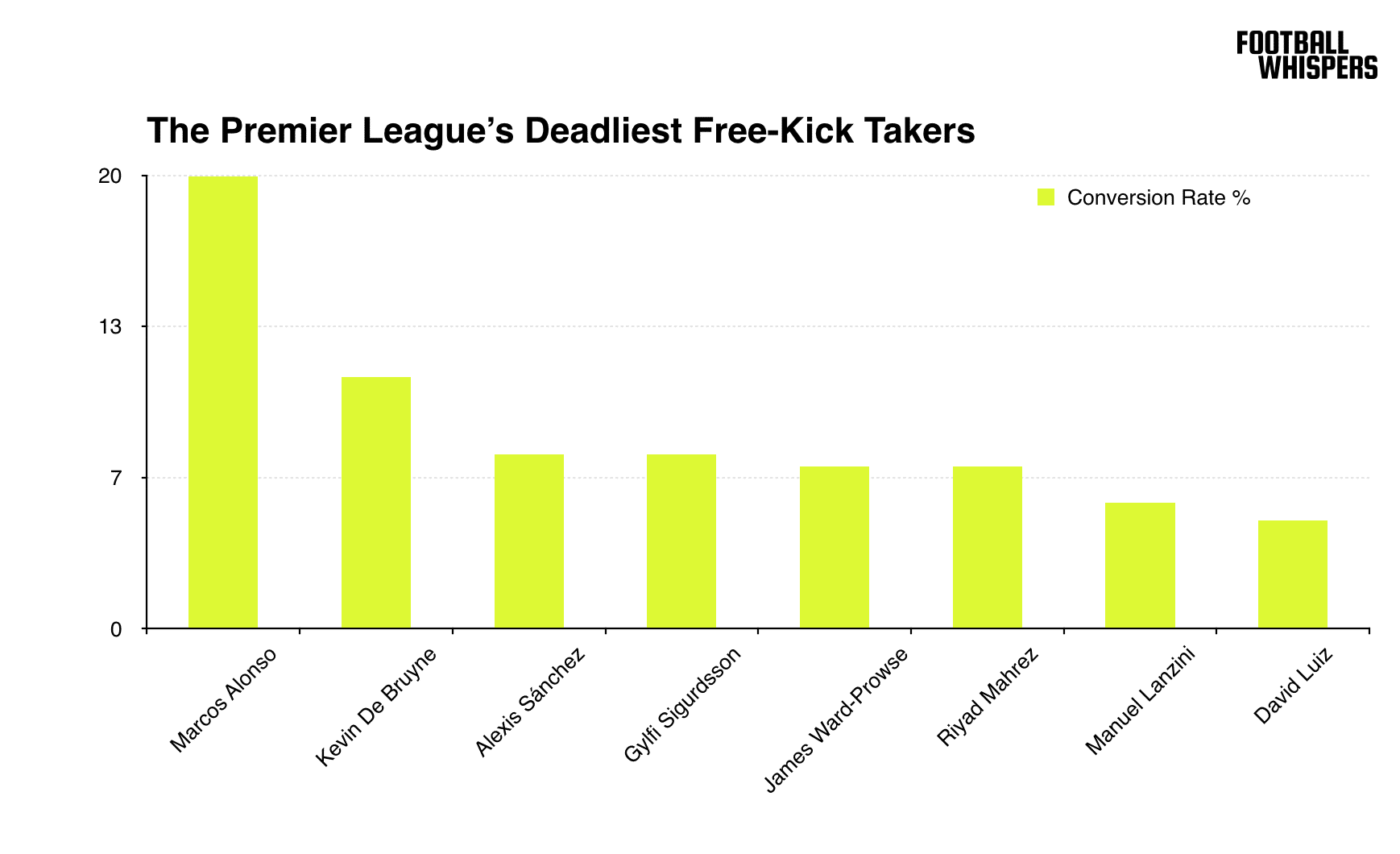 The Chelsea wing-back isn't just a goal threat from dead ball situations. He's scored 12 goals since arriving in England at the start of the 2016/17 season and a quarter of them have come from free-kicks.

The Spaniard, who struck the post against Barcelona in midweek from a free-kick, has converted 20 per cent of his efforts in the Premier League, a quite frankly incredible return.

When it comes to dead ball situations there really is nobody better than Alonso in England's top flight.