Portugal have an excellent record against Turkey but did lose the last time these two sides met back in 2012. Cristiano Ronaldo is expected to fire Portugal into the Play-Off Finals on Thursday night against a Turkey side who greatly disappointed at Euro 2020.

Cristiano Ronaldo is the highest-scoring international football of all time and at the age of 37, he shows no signs of slowing down. Ronaldo has been in decent form for Man Utd this season, scoring 12-goals in the Premier League, and top scores for Portugal in the World Cup qualifiers with 6-goals, so you can see just why we're backing the legend to score against Turkey on Thursday night.

Over 2.5 goals were scored the last time these two countries locked horns and on that day, Turkey ran out 3-1 winners. At least three goals have been scored in five of Portugal's last six outings in all competitions with Ronaldo and co scoring at least three goals in four of those games. Five of Turkey's last six fixtures have also witnessed over 2.5 goals scored and that includes a huge 6-0 win over Gibraltar and the 6-1 loss to the Netherlands.

All you need to know ahead of Portugal vs Turkey

Portugal expected to brush aside Turkey on Thursday

Portugal were left bitterly disappointed in their last qualifying game against Serbia back in November. Despite having the home advantage and going 1-0 up through Sanches in the 2nd-minute, Portugal lost the game 2-1 with Mitrovic scoring the winning goal in the 90th-minute. Portugal will have to up their game on Thursday night but with the talent they have within their squad there is a good chance that the hosts will progress through to the play-off finals.

Turkey took on Montenegro at the Stadion Pod Goricom in Podgorica back in November where despite going behind early on, Turkey fought back to secure all 3pts. Beciraj put Montenegro 1-0 up but Turkey responded well and went in at the break level thanks to Akturkoglu's equaliser in the 22nd-minute. On the hour mark, Kokcu thrust Turkey in front ad the visitors held on to claim their victory.

Portugal: Lopes, Pepe, Dias, Semedo, Neves, Sanches, Mário, Silva and Trincão have all missed out on selection for the Play-Offs semi-final. 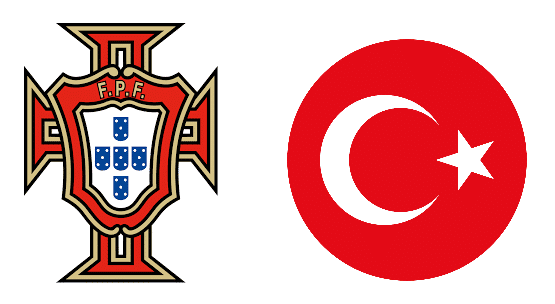