Burton will be looking at Portsmouth and thinking ‘next year'. How much do they need in the summer to close that gap on the top sides? Find out with our Portsmouth vs Burton match preview with free tips, predictions and odds mentioned along the way.

Portsmouth vs Burton: A trio of tempting tips

It's somewhat of a brave prediction to suggest Portsmouth will drop their first points under Danny Cowley in a home match against 18th place Burton. We stand by it though and here is why. Pompey, who look set for a playoff finish, are much better away from home than at Fratton Park. Their home form has only contributed eight wins from 20; for reference, they have 11 wins from 18 on the road. Burton are five points better off in their away games and they're unbeaten in eight. The last four meetings between these two at Fratton Park have ended in ties too. For these reasons, a draw doesn't sound so ridiculous.

Predicting that both teams will find the net

At the end of our first tip we referred to the four previous head-to-heads that have taken place at Portsmouth's home ground. Well, the last three saw both sides score in each of them. A look at the more general form supports the prediction that both sides will score too. Burton have scored in all but one of their last 10 away games. Portsmouth have found the net seven times in four matches under Cowley.

There could be plenty of goals flying in

Making the prediction that both teams will find the net doesn't necessarily mean you'll breach the 2.5 goals marker but it's immediately much closer. That's not the only reason we think this fixture will contain three or more goals though. Portsmouth have seen three of their last four matches end with three goals in the and their visitors have split their last 10 matches evenly at five over and five under. Their head-to-heads usually bring goals too; the game at Burton earlier this season saw six goals whilst the two league fixtures last year offered up seven goals in the shape of a 2-2 draw and 2-1 Pompey win.

Portsmouth vs Burton: The form book, stats, odds and more

Not only do Portsmouth look nailed on for a playoff spot now but they'll fancy their chances of winning them too. They're in good form since their managerial switch. Burton are another side that have benefited from a change of gaffer. Jimmy Floyd Hasselbaink was never going to take his team up this year but it's games like this where he'll get a measure of how much work they need in the summer. 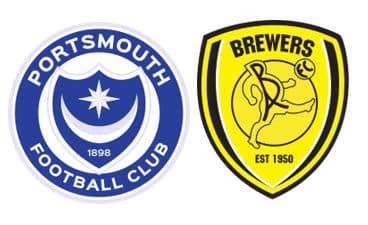