If ever sides were getting desperate for three points its these two. Anything but a win for either side will be near disastrous. Will either side collect all three points? Find out with our Portsmouth vs Bristol Rovers match preview with free tips, predictions and odds mentioned along the way.

Portsmouth vs Bristol Rovers: Betting tips for you

Pompey to get back on board the promotion trail

Rewind a month and Portsmouth were enjoying a new manager bounce under Danny Cowley. Now, the honeymoon is over with four games without a win. Thankfully for them, Bristol Rovers are a) a worse team and b) on an equally poor run with just one win in 10 attempts. If you turn your attention to the respective home and away form of the sides then a Portsmouth win becomes even more likely. Of Pompey's recent run only one loss has come at Fratton Park; their other two home games under Cowley have been wins. Bristol Rovers are sickeningly poor on the road too – they've not won away from home since early December with just three draws in that time too.

A clean sheet for Portsmouth?

The first of our trio of tips has already highlighted the fact neither side are on top form so it's perhaps little surprise we're suggesting at least one will fail to score in this match. Why have we come to that conclusion? Well, five of Portsmouth's last 10 matches on their own patch have seen a ‘nil' whilst Bristol Rovers, who we expect to be the team to blank, have only scored five in 10 away days. They've blanked in six of them.

Portsmouth to lead at the interval and to see it through

We're going to end our predictions by going all out for a Portsmouth win in the sense that we think they'll lead at half time and full time. Pompey have led at the interval in 15 matches this season and only once have they not left with all the points in the bag. If Portsmouth do get their noses in front in the opening 45 then it's bad omens all round for Bristol Rovers; they've trailed at the interval in 15 matches so far this campaign and they've not collected a single point when that has been the case.

Another nail to the Rovers coffin

Both Portsmouth and Bristol Rovers are limping their way to the finish line this season as those teams around them pull away to make their respective targets look that little bit tougher. Pompey can still rescue their promotion hopes whilst Bristol Rovers aren't down yet. What you can say though is that you'd rather be Portsmouth than Bristol Rovers coming into this game. 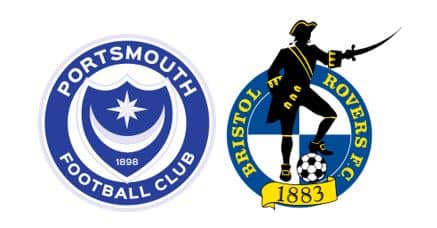